"Chromosaturation" Offers an Immersive Experience of Color and Light at PAMM 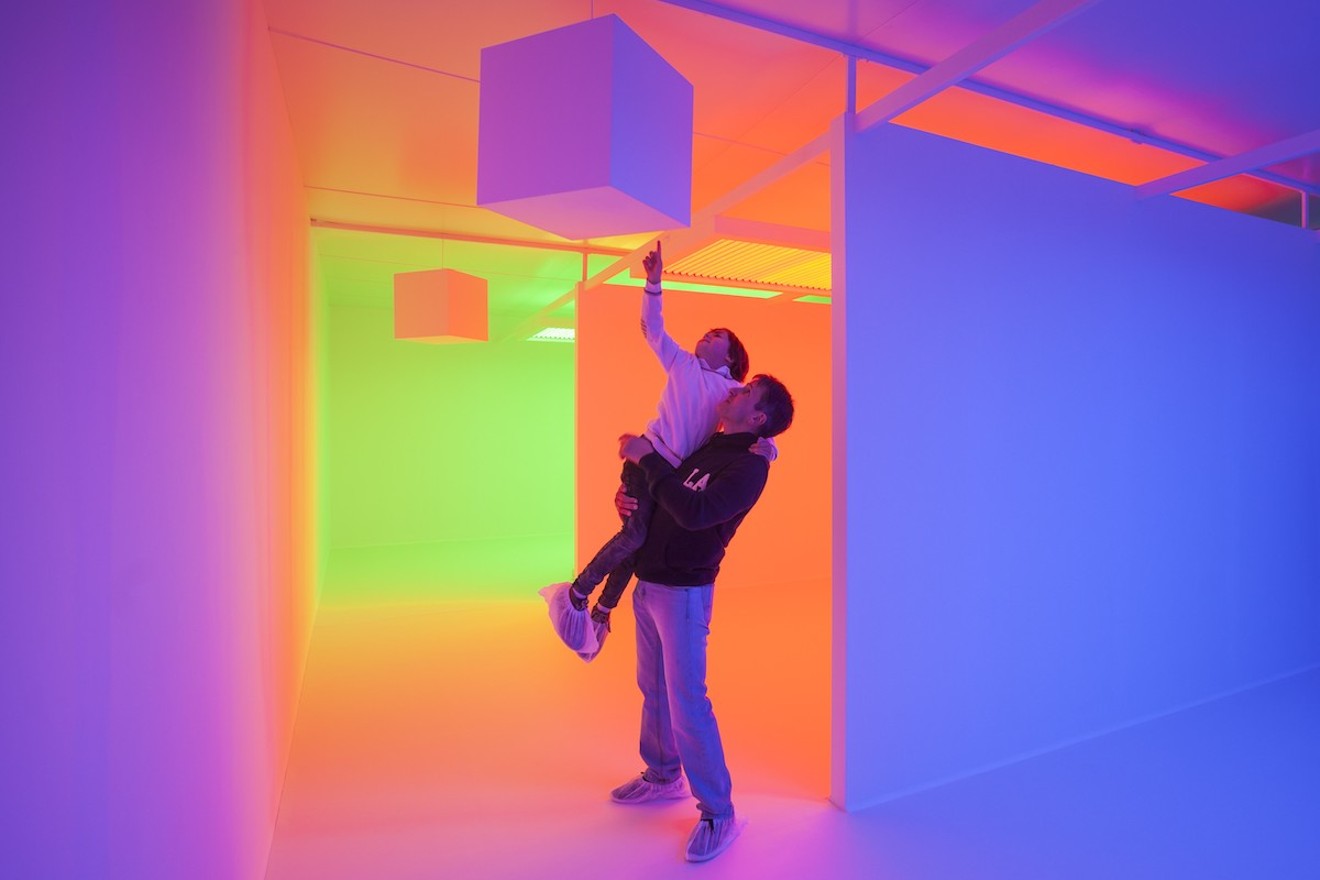 Carlos Cruz-Diez's "Chromosaturation" was acquired by Pérez Art Museum Miami in 2020. Photo by Rafael Lafuente, © Museo Würth/Rafael Lafuente/Bridgeman Images
Over the past few years, Miami has seen an emergence of immersive — and, let's admit it, Instagram-friendly — art spaces such as Superblue, Artechouse, and the many pop-up Van Gogh experiences. Pérez Art Museum Miami's (PAMM) latest installation, "Chromosaturation" by Carlos Cruz-Diez, reminds viewers that immersive art experiences aren't just the trend du jour but were developed in the 1960s, pioneered by Cruz-Diez's experiments with color, kinetic, and optical art.

Conceived by the Venezuelan artist in 1965, "Chromosaturation" consists of three flowing chambers made up of red, green, and blue hues, inviting guests to immerse in the artificial environment of monochromatic lights. The saturated chambers are an experiment on the viewer's retina — submerge long enough, and your perception of the space and objects around you will alter as the color engulfs your every being.

The installation, which opened last month, was acquired by the museum in 2020, a year after Cruz-Diez died in his adopted city of Paris at the age of 95.

"He dedicated his life to researching and reflecting color and was very systematic," explains Iberia Pérez González, the museum's Andrew W. Mellon Caribbean Cultural Institute coordinator and organizer of the installation alongside former director of curatorial affairs René Morales. "His whole goal was to detach color from form and the material support, and this artwork is considered his accomplishment of doing that."

Although the museum's buzziest exhibition is currently "Marisol and Warhol Take New York," Pérez González points out that "Chromosaturation," alongside "Penetrável Macaléia" (1978) by Brazilian artist Hélio Oiticica (the first to coin the term "Tropicália"), and the infamous "blue strings" of the outdoor installation "Penetrable BBL Blue" by Jesús Rafael Soto (another Venezuelan pioneer in kinetic art and a colleague of Cruz-Diez) are all exciting and coincidental moves into immersive or experiential showings at PAMM.

"These are three artists that are very much interested in similar things, in particularly involving the spectator much more, trying to challenge the basic understandings of painting and wanting to go beyond the picture frame to expand their work beyond the form," Pérez González says. "The three of them were interested in ideas around color, and somehow they all developed these ideas in a different way. So I think it's very interesting we have these three immersive installations at the same time of three artists that were very important, working in the mid-'60s and '70s in similar concerns."

The acquisition of "Chromosaturation," made possible with funds from Jorge M. Pérez, is an important addition to the museum's permanent collection and ongoing commitment to presenting exhibitions of work from artists across Latin America, the Caribbean, and the African diaspora.

Beyond Cruz-Diez's ability to throw color into space with "Chromosaturation," the chambers' colorful aesthetic has unintentionally created a perfect aesthetic for snapping psychedelic selfies for the 'Gram— but don't get distracted by your phone and miss out on the visual effects that the installation offers only with total immersion and participation.

"There is definitely an experiential aspect of the work that anyone can enjoy as long as they’re curious enough to spend time enough to try and see how these shifts happen instead of going in, taking a selfie, and leaving," Pérez González adds.

"Chromosaturation." On view at Pérez Art Museum Miami, 1103 Biscayne Blvd., Miami; 305-375-3000; pamm.org. Tickets cost $16.
KEEP MIAMI NEW TIMES FREE... Since we started Miami New Times, it has been defined as the free, independent voice of Miami, and we'd like to keep it that way. With local media under siege, it's more important than ever for us to rally support behind funding our local journalism. You can help by participating in our "I Support" program, allowing us to keep offering readers access to our incisive coverage of local news, food and culture with no paywalls.
Make a one-time donation today for as little as $1.

Don't Miss Out
SIGN UP for the latest arts & culture news, free stuff and more!
Join Today
Sign Up
Become a member to support the independent voice of South Florida and help keep the future of New Times FREE
I Support