Saturday also brought performances by the likes of Latto, City Girls, and Baby Tate, reminding everyone that women are continuing to broaden their reach in hip-hop. (New Times is still waiting on Rolling Loud to finally book a woman as a headliner for its Miami show.)

You also had Lil Uzi Vert, who was having such a good time onstage that they didn't want to get off after their allotted time was over. Lil Uzi kept the show going until organizers finally cut off their mike.

Saturday closed with a headlining set by Atlanta rapper Future, who brought out Lil Durk, who performed at the festival the previous day, and Travis Scott, who is still trying to overcome his tarnished reputation after last year's Astroworld tragedy. Despite being excited about seeing Scott live, the crowd behaved itself, and the appearance seemingly went off without a hitch.

Here's what else New Times witnessed during the second day of Rolling Loud 2022: 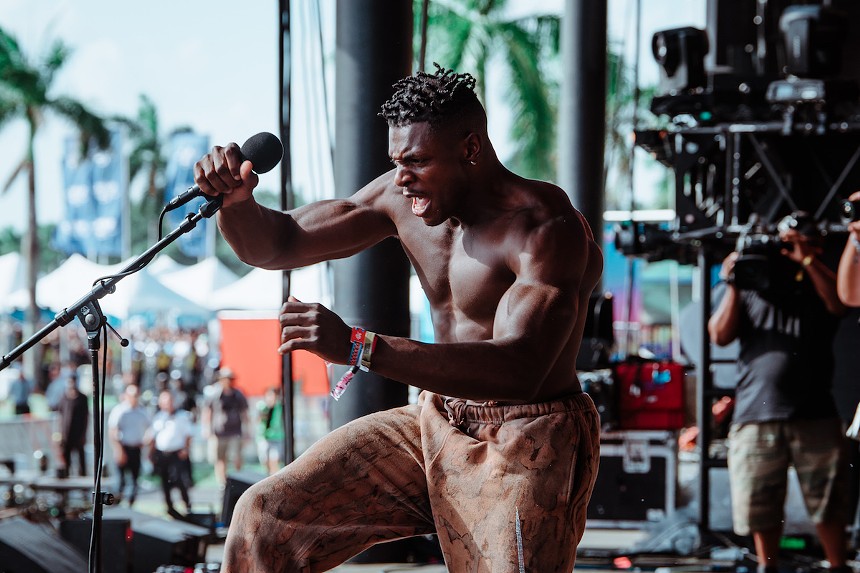 It's not often you see one of the earliest acts at a music festival drawing an eager audience. As the sun wrapped its arms around the festival grounds at 5:15, hundreds of fans already drenched in sweat started chanting, "Je-leel! Je-leel! Je-leel!" They knew exactly what type of show they were about to get. Jeleel! is kinetic energy personified, literally introducing himself by ripping apart his tank top and executing a backflip. Gopuff Stage bore witness to a freak of nature who also happens to make some hard-hitting hyperpop. Belligerent fans reflected his energy at full throttle, throwing around anything from trash cans to traffic cones. The bone-shaking bass on every song set the tone for Jeleel's high-spirited, sometimes chipmunked vocals. For the riotous hit "Dive In!" he dove right into the sea of people singing his praises. You don't see stuff like this every day. Olivier Lafontant 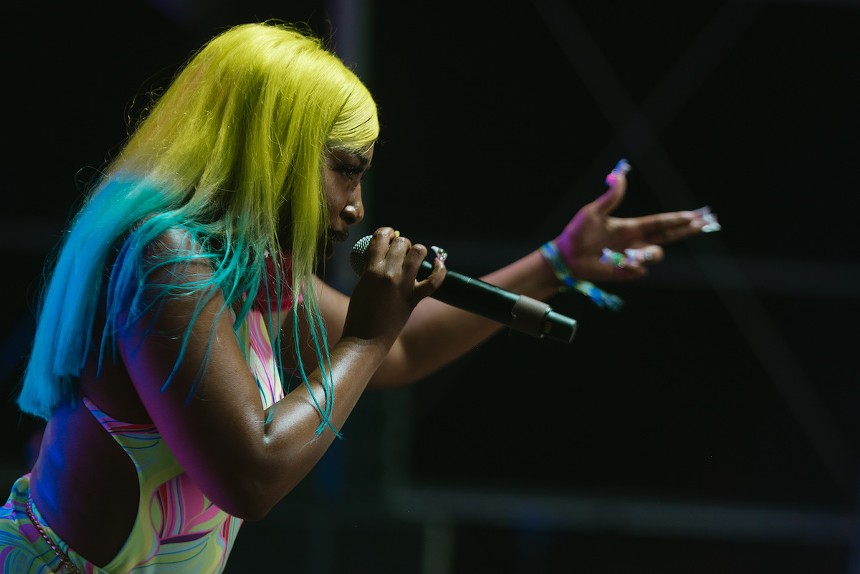 Although she gained significant traction after her 2020 viral hit, “I Am,” featuring Flo Milli, Baby Tate (formerly known as Yung Baby Tate) has taken strides as a versatile rapper since her 2015 debut project ROYGBIV. A slick-talking, tongue-in-cheek lyrics, she formulates her songs with a dash of attitude, a sprinkle of braggadocio, and heaps of unyielding confidence — energy she tapped into when she strutted across the Monster Stage at Rolling Loud in a bright bodysuit and pink boots. Opening with her 2021 single “Pedi,” she had the crowd bouncing as she danced, twerked, and swung her yellow and blue ombre tresses throughout a blazing set. Flowing through tracks from her After the Rain EP like “Eenie Meenie” and “Rainbow Cadillac,” she could’ve effortlessly engaged fans for a full hour. An unconventional, versatile artist, Baby Tate is on a fast ascension to the top of the game. “I never want to box myself in as an artist,” she told New Times. “I approach music very real. What energy does this song bring out of me, and that’s what I give.” Shanae Hardy

The self-proclaimed Underground King took over Gopuff Stage with his signature stoicism, letting his loyalists do all the screaming and yelling for him. It's an odd dynamic when an artist is so chill onstage as the audience expends its energy trying to go bar for bar on each passing song. Standing still and swinging his arms onstage, Lucki almost could have been mistaken for a classical conductor, guiding his cult following rather than a symphony. A setlist full of monotone flows, warbling synth melodies, and emphatic bass was exactly what the crowd came for. There's always a collective feeling of triumph when Lucki comes to town. Hearing singles like "Super Urus" and "Y Not?" reverberate through a festival setting was nothing short of sensational. Olivier Lafontant At last year’s Rolling Loud, Saucy Santana made his debut as the City Girls' guest performer. This year, he needed no introduction, as he made his way to the Cîroc Stage clad in a monochrome yellow Prada getup. His quick ascension in the past year was reflected in a throng of fans eagerly awaiting his performance. Assisted by background dancers and his producer, Tre Trax, he utilized the entire stage, sashaying back and forth to “Walk,” twerking to “Booty” and “Up & Down” featuring Latto, and igniting fans with his signature TikTok dances. As he continues carving out a path for queer, gender-nonconforming rappers, he's shattering glass ceilings and making room for a refreshing and diverse class of rappers to put a stamp on the genre. And he’s just getting started. Shanae Hardy

Rolling Loud vets City Girls commanded the Cîroc Stage clad in matching silver two-pieces and butt-length tresses. They embodied their unabashed, unapologetic mien with their most popular songs, including “Act Up” and “Take Yo Man.” They broke up the monotony of a regular set with a skit and pole dancers, which helped set the tone for the rest of their energetic performance. Yung Miami and JT were skillfully in sync as they oscillated between classics and new tracks. But what’s a City Girl show without ass-shaking? There were plenty of tweetable twerk moments and salacious choreo to set the crowd off. Delivering one of the best sets of the night, the Miami natives demonstrated how they've become the crème de la crème of pussy rap and can hold their own as headliners. Shanae Hardy

When the speakers at the Gopuff Stage started blaring “Big Latto” in a cyclical chant, you knew Latto was coming with a superior performance. A braggadocious country rapper, the self-proclaimed Queen of da Souf emanated Bad Bitch energy. Her money-green bodysuit and matching furry boats fit the glamourous lifestyle her songs portray. She danced and maintained her stamina as she went blow for blow with songs from her album 777, like “It’s Givin” and the Mariah-Carey-sampling hit “Bad Bitch Energy.” But Latto isn’t merely a brash, Southern lyricist. She tapped into her freakier side with songs like “Muwop,” featuring Gucci Mane, and her standout verse on Boosie Badazz’s “Nasty Nasty.” Latto’s evolution to date is just a glimpse of her trajectory to stardom. The effort and talent she injected into her set were exciting to witness and served as a confirmation of the long career she has ahead of her. She could’ve easily helmed a performance on the main stage. Shanae Hardy The sheer bandwidth of Future's discography is a marvel. This man has so many damn hits, bro. Ranging from DS2 staples like "Stick Talk" and "Thought It Was a Drought" to his mainstream breakout "Same Damn Time" to classic collaborations like "Relationship" with Young Thug, he brought familiar material for everyone. He was consistently vocal about his love for Miami, making sure to remind the audience of his gratitude. The pinnacle of Future's set came from his special guests — he brought out Friday night's standout Lil Durk before welcoming Travis Scott back to Rolling Loud for the first time since last year's Astroworld tragedy. The latter was a joyous reunion, as the Houston native vibrantly performed his most acclaimed hits, "Goosebumps" and "Antidote." And there was no way Future could close out the night without the anthem of a lifetime in "March Madness," effectively wrapping up a headlining performance to rave about. Olivier Lafontant
KEEP MIAMI NEW TIMES FREE... Since we started Miami New Times, it has been defined as the free, independent voice of Miami, and we'd like to keep it that way. With local media under siege, it's more important than ever for us to rally support behind funding our local journalism. You can help by participating in our "I Support" program, allowing us to keep offering readers access to our incisive coverage of local news, food and culture with no paywalls.
Make a one-time donation today for as little as $1.

A Deerfield Beach native, Shanae Hardy is a South Florida-based culture and copy writer. When she’s not pressed over deadlines or Beyoncé, you can find her fixated on a book.
Follow:
Twitter: @Shanae_Hardy
Instagram: @Shanae_Evelyn_/
Olivier Lafontant is an intern for Miami New Times. He's pursuing a bachelor's in digital journalism at Florida International University. He specializes in music writing and photography and got his start as a writer for South Florida Media Network in 2021.
Contact: Olivier Lafontant
Follow:
Twitter: @oliviersaidhi
Instagram: @oliviersaidhi