Rolling Loud 2022 Day One: Ye Made an Appearance After All 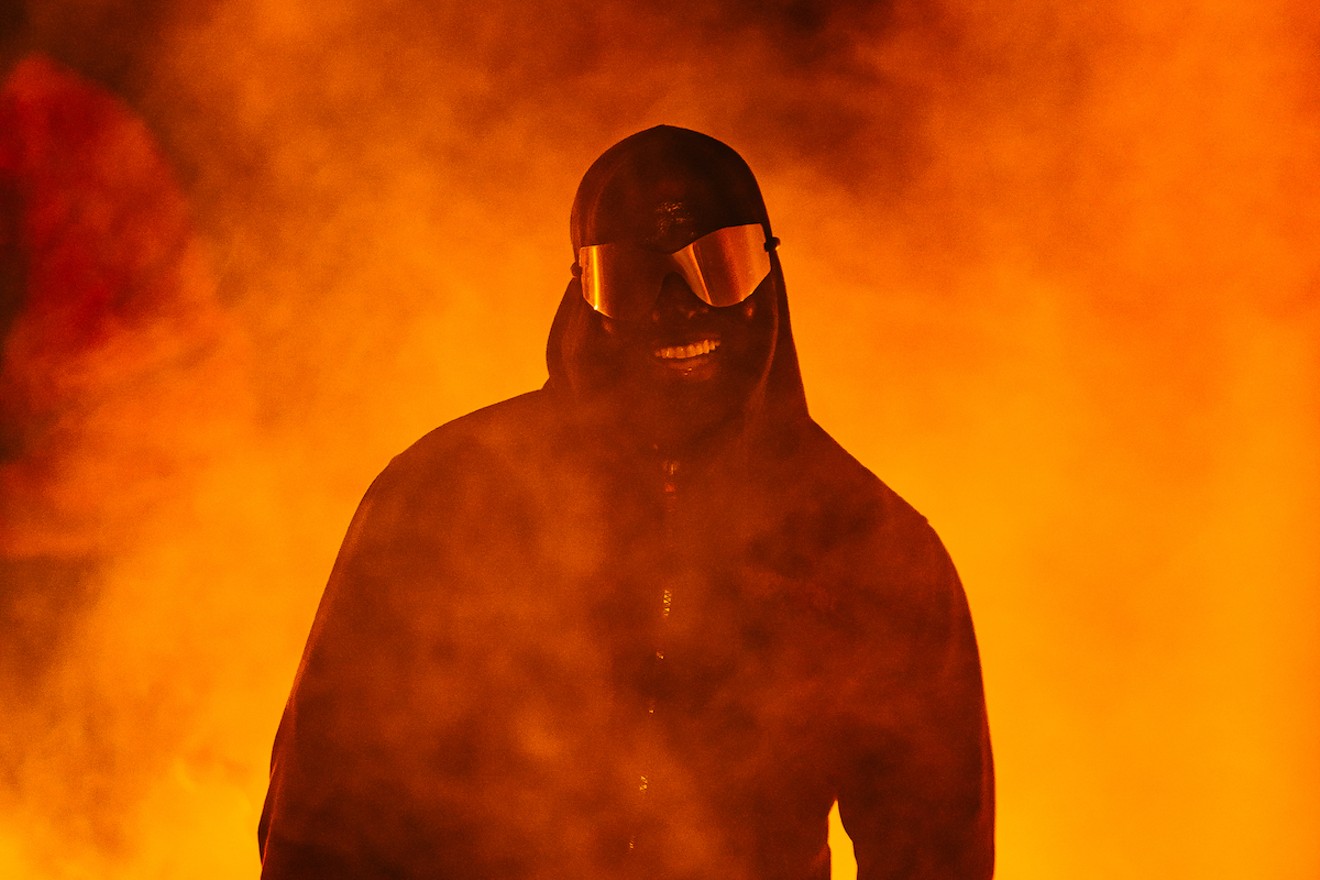 Ye (AKA Kanye West) was scheduled to headline Friday, but earlier this week, news broke that he had pulled out of the show despite Rolling Loud's attempts to keep him on the lineup. His former protégé and friend Kid Cudi was announced as his replacement — which, considering the pair's tumultuous history, seemed like an odd if more than acceptable choice.

But if Cudi thought Ye would let him steal the spotlight, he had another think coming. West made a surprise appearance during Lil Durk's set at the Gopuff Stage. Adding insult to injury, Cudi's set was unfolding at the same time over at the Cîroc Stage. It was an odd way for Ye to thank Cudi for filling in for him.

Beyond the Cudi/Ye drama, New Times witnessed plenty of memorable moments during the first day of Rolling Loud 2022. 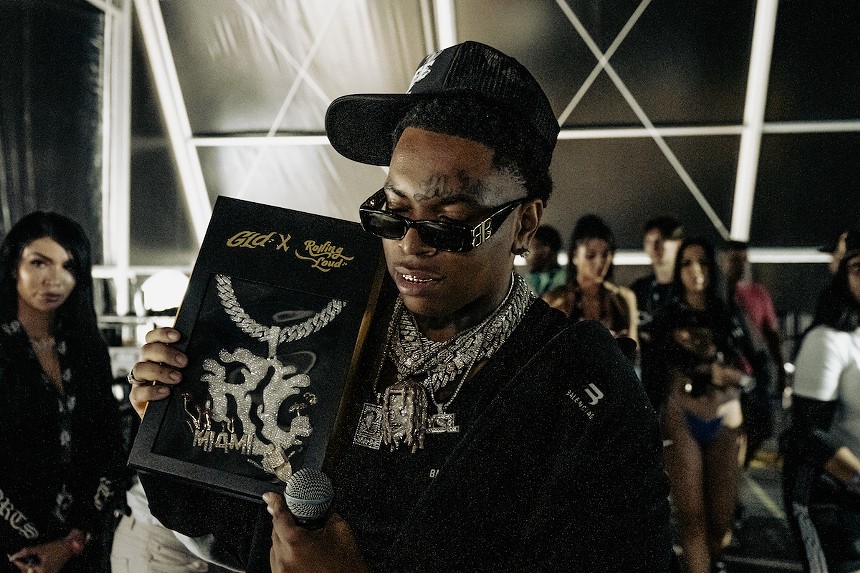 It has been a bleak year for Young Stoner Life Records. The untimely passing of Lil Keed days after Young Thug, Gunna, and 26 other YSL members were indicted on RICO charges was a big blow to the rap scene in Atlanta. But YSL affiliate Lil Gotit, Keed’s younger brother, used his RL set to turn anguish into revelry, performing some of Keed, Thug, and Gunna’s greatest hits alongside 100,000 random dudes onstage. Gotit may have only performed a song or two from his own catalog, but he had no problem providing the crowd with celebrated hits like Keed’s infectious “HBS.” Paying homage to some of Thug and Gunna’s recent highlights like “Hot” and “Ski” was heartwarming, too. Gotit’s stationary jig onstage was a little comical, but he looked comfortable as hell with his brigade of hype-men and -women giving the crowd energy to feed off. Olivier Lafontant 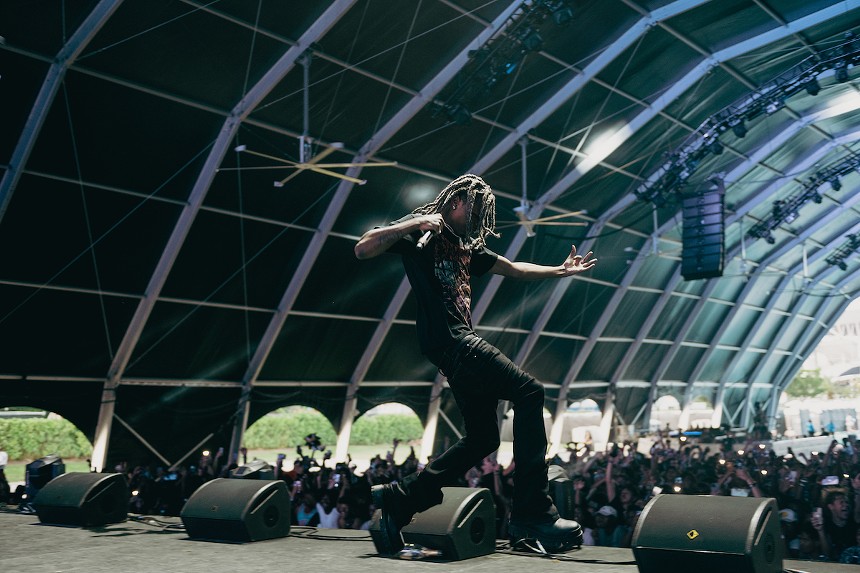 The amount of influence Destroy Lonely is already holding over the youth is frighteningly palpable. His set right after Lil Gotit's kicked off with inverted, polychromatic on-screen overlays flashing behind him as "Oh Yeah" flooded the soundwaves. At times, Lone was moving mountains without having to say much. The crowd latched onto him immediately, and “20Yrs Old” is monumental every time he performs it. The masses reflected any command that yelled into the mike with reckless abandon. Lone’s presence was youthful, instinctive, and dominant, and even as he performed SoundCloud exclusives like "Hldmyhnd" and "Do The Most," his audience never missed a step. Pulling crowds that sing along to material you haven’t even dropped on other major platforms is crazy. Olivier Lafontant 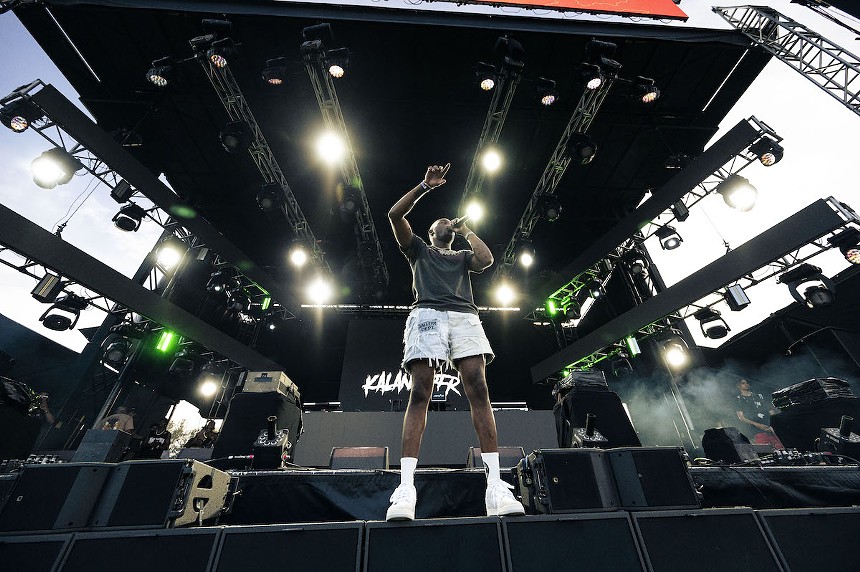 Kalan.FrFr captured the attention of any curious skeptics at the Snipes Stage, converting them to fans with his charisma and stage presence. Clad in distressed jean shorts, a Gallery Dept. T-shirt, and black shades, he undergirded his melodic delivery with effortless West Coast swagger. A surprise appearance from rapper King Combs (Diddy’s son) exemplified the impression he’s made in the industry since he dropped his two acclaimed mixtapes, “Two Fr” and “Leak the Tape,” in 2018 and 2019, respectively. His 35-minute set blazed with knocking tracks that had everyone in the crowd dancing by the end and — as his latest single suggests — had everyone convinced he’s on his way to being a superstar. Shanae Hardy

The queen of all things icy, Saweetie breezed through a magnetic set on Rolling Loud’s Cîroc Stage. Flanked by dancers who matched her white-T-and-jean-short outfit (minus the diamond-laced necklaces and bracelets), she kicked off her performance with her 2020 viral hit “Tap In,” a Too Short-sampled single stamped with Saweetie’s Pretty Bitch Music trademark. Technical difficulties didn’t stop her from pivoting and engaging with fans when her mike went out, a testament to the authentic connection she’s built throughout her career. And if any naysayers in the crowd had any doubt about her longevity, she quickly thwarted those assumptions when she jokingly-not jokingly questioned, “Are we having some technical difficulties 'cause a bitch wanna rap?” She closed out her set on the same momentum she opened with as the beat to “My Type” reverberated throughout the hyped crowd that rapped along to every lyric. Shanae Hardy

By now everyone should know that Playboi Carti is a heavy-metal superstar. That’s common knowledge, right? The past year has seen the King Vamp Tour progress from a burgeoning experiment o a masterclass in visual and audible distortion. Shrouded all in black, he isolates himself from the crowd, standing on an elevated platform in front of strobe lights as his cronies vandalize an array of minivans lined up onstage. Playboi Carti is the centerpiece of his own armageddon. His signature primal screams and groans are mostly unintelligible, but in between “Sky” and “No Sl33p,” he bellows the name of his guitarist like a mad scientist calling for his trusty lab partner: “Oji! Oji!” Using Oji’s staggering guitar work in place of synths takes the show all the way over the top. The rendition of “Control” was contorted and jagged, yet painstakingly euphoric made even better by Carti’s hellish melodic tone. Olivier Lafontant

With a set time that clashed with Kid Cudi’s, Lil Durk’s delayed performance was made even more dreadful as thick raindrops began to drizzle and sizzle the anticipation of an anxious crowd. But those minor setbacks didn’t affect Lil Durk’s excellent opener. A live band built momentum till the moment he hit the stage and made some of his most popular songs detailing the gritty come-up in his hometown of Chicago even more palpable. But it wouldn’t be a Rolling Loud show without controversy. Right after performing “Hot Shit,” his latest collab with Cardi B and Ye, he surprised fans with a surprise appearance by Yeh himself, who performed “Father Stretch My Hands, Pt. 1,” a song that credits his former friend and collaborator Kid Cudi — at the same time Kid Cudi was headlining his own set on the opposite side of the festival. Coincidence? Our tinfoil hat says otherwise. Shanae Hardy

What could've been a wholesome embrace between an artist and his loyal fans was soiled in less than half an hour. Kid Cudi's emergence as substitute headliner in place of an AWOL Ye had been subject to mixed reactions for the past week, and of course, any sort of "beef" they've had recently has fueled some attendees to scapegoat him for their dismay. The set kicked off smoothly, beginning with the high-energy throwback "Down & Out" before transitioning into highlights from Man on the Moon III. As tracks concluded, dedicated fans made it a point to chant Cudi's name, and he seemingly loved it. At the end of "Marijuana," he was hit in the face by one of the packs of water getting thrown in and out of the crowd by security and whoever else. Fuming, he threatened to leave if something else was thrown at him. Sure enough, another pack of water was launched and he stormed off. It was a frustrating end to the night on the Cîroc Stage for sure, made worse by corny dudes chuckling to themselves, saying, "That shit was funny, bro." Olivier Lafontant
KEEP MIAMI NEW TIMES FREE... Since we started Miami New Times, it has been defined as the free, independent voice of Miami, and we'd like to keep it that way. With local media under siege, it's more important than ever for us to rally support behind funding our local journalism. You can help by participating in our "I Support" program, allowing us to keep offering readers access to our incisive coverage of local news, food and culture with no paywalls.
Make a one-time donation today for as little as $1.

A Deerfield Beach native, Shanae Hardy is a South Florida-based culture and copy writer. When she’s not pressed over deadlines or Beyoncé, you can find her fixated on a book.
Follow:
Twitter: @Shanae_Hardy
Instagram: @Shanae_Evelyn_/
Olivier Lafontant is an intern for Miami New Times. He's pursuing a bachelor's in digital journalism at Florida International University. He specializes in music writing and photography and got his start as a writer for South Florida Media Network in 2021.
Contact: Olivier Lafontant
Follow:
Twitter: @oliviersaidhi
Instagram: @oliviersaidhi