Latto's energetic Rolling Loud performance stood out as one of the best sets on the Gopuff stage. Photo by Beth Saravo (@baeth)/Courtesy of Rolling Loud
Like Rolling Loud festivals of years prior, this year’s Rolling Loud in Miami propagated viral-worthy controversy: Ye made an appearance during Lil Durk’s set, Kid Cudi was disrespected by fans throwing water bottles at him and subsequently walked off the stage, and social media it-girl Brittany Renner threw a bottle of water at a fan’s face. Nothing out of the ordinary for a festival that was met with backlash last year when DaBaby went viral for making homophobic comments during his set.

But a blaring contention throughout the weekend was the lack of women performers billed as headliners. This year was one of the most inclusive for the ladies, with about 26 women on the docket, but in 2022, a year where women are clearly dominating hip-hop, one of the biggest hip-hop festivals not centering them points to the misogyny women still face in the industry.

Since its inception in 2015 as a homegrown festival at Soho Studios in Wynwood, Rolling Loud has curated a global ecosystem for Miami’s music scene and some of hip-hop’s most prominent players. Back then, hip-hop festival stages mainly catered to men with a sprinkle slating Nicki Minaj as a headliner. As hip-hop festivals started to garner more momentum, women rappers were beginning to crop up and shatter the suffocating barriers to stardom. Bubbling under Nicki Minaj’s hegemony, acts like Dej Loaf, Azealia Banks, Tink, Junglepussy, Jean Grae, Rhapsody, Noname (who went by Noname Gypsy at the time), and Dreezy were widening and diversifying the confines around female rap. It would take a few more years for labels and consumers to catch up to the pouring of female rappers throughout regional underground scenes, but seven years later, women are at the helm of one of the most significant shifts in hip-hop's history.

So why are they still underrepresented throughout major festivals in the country?

According to a USC Annenberg Inclusion Initiative study that analyzed 700 songs on the Billboard Hot 100 year-end charts from 2012 to 2018, professor Stacy L. Smith found that a mere 12.3 percent of songwriters were women, 22 percent of the top-ranking artists were women, and only two percent of producers across 400 songs were women, suggesting a lack of representation in every branch of the music industry.

In 2018, Rolling Loud finally tried to rectify the blaring gender gap of their lineup by tapping Cardi B as the first-ever woman headliner at its Los Angeles festival (her spotlight was interrupted by her husband Offset attempting to repair their relationship). This year, it's recruited Nicki Minaj as a headliner for the New York City edition at Queens’ Citi Field in September.

Yet, Miami has yet to see a woman headliner. 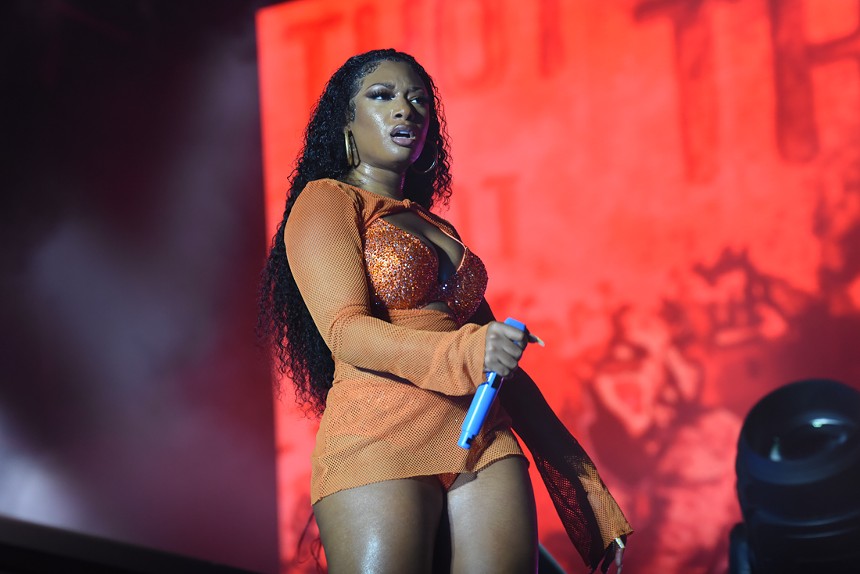 Megan Thee Stallion gave a headliner-worth performance at Rolling Loud 2021.
Photo by Michele Eve Sandberg
Last year, Megan Thee Stallion’s headliner-worthy performance was overshadowed by DaBaby bringing out Tory Lanez on stage, violating a protective order that requires Lanez to stay at least 100 yards away from her after he allegedly shot her in the foot during an altercation in July 2020. And this year, Latto had one of the best performances of the weekend while the City Girls, gender-nonconforming rapper Saucy Santana, Flo Milli, Baby Tate, Saweetie, Shenseea, and Dream Doll injected the weekend with standout performances that ignited dense crowds snaking their stages.

The reaction they received from fans encapsulated the new tide of hip-hop. The most popular genre in the country, rap consumers are becoming increasingly diverse, which has cleared a pathway for the ascension of female rappers. Currently, Lizzo’s hit single “About Damn Time” has sustained the number one spot for three weeks on Billboard's Hot R&B/Hip-Hop Songs chart. Last year, Doja Cat eclipsed Drake as the most monthly streamed artist on Spotify with nearly 64 million streams a month, and earlier this month, headliner performances by Cardi B and Nicki Minaj at London's Wireless Festival went viral for the overwhelming support they received from the crowd.

That progress has yet to be reflected at other major festivals like Coachella and Ultra Music Festival, hindering up-and-coming female artists from expanding their fanbases.

When asked about the lack of representation for women at festivals like Rolling Loud, rapper Baby Tate told New Times, “I think it’s a group effort. It takes for women to continue being powerful and knowing and holding our power, but also for other people to see us as meaningful. We can be as strong and powerful as we want, but if someone else doesn’t see us that way, there’s not much we can say, so I think we should create our own Rolling Loud for the gworls,” she added, jokingly.

Whether the salve is for women and queer rappers to bond together and start their own major festival or for the industry to begin viewing and booking them equally as often as male rappers (or both), the strides women are making in hip-hop should be recognized at Rolling Loud and other festivals. Sprinkling a handful of women rappers in the lineup is not enough to obliterate the misogyny and sexism women have historically faced in the genre.

And as the current landscape suggests, it’s time for women to take their rightful place on the center stage.
KEEP MIAMI NEW TIMES FREE... Since we started Miami New Times, it has been defined as the free, independent voice of Miami, and we'd like to keep it that way. With local media under siege, it's more important than ever for us to rally support behind funding our local journalism. You can help by participating in our "I Support" program, allowing us to keep offering readers access to our incisive coverage of local news, food and culture with no paywalls.
Make a one-time donation today for as little as $1.

A Deerfield Beach native, Shanae Hardy is a South Florida-based culture and copy writer. When she’s not pressed over deadlines or Beyoncé, you can find her fixated on a book.
Follow:
Twitter: @Shanae_Hardy
Instagram: @Shanae_Evelyn_/