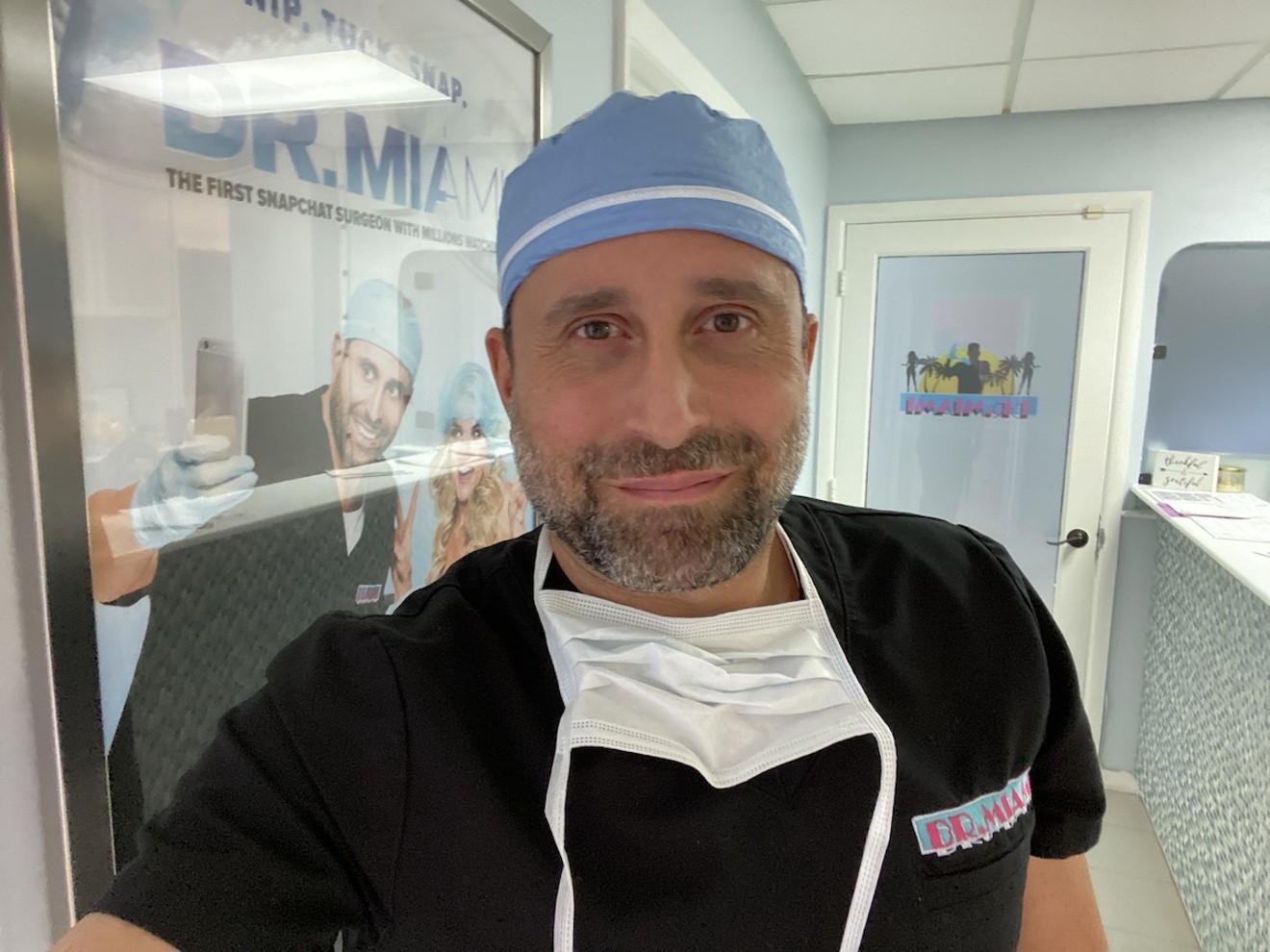 More widely known as a BBL, the intricate procedure — wherein a doctor sucks fat from various parts of the body part and injects it into the buttocks, creating the appearance of a snatched waist and voluptuous bum — has become all the rage, thanks in (ahem, large) part to celebrity influence from the likes of Kim Kardashian, Nicki Minaj, and Cardi B.

The procedure has been cited in dozens of deaths worldwide, earning it the title "the deadliest of plastic surgeries," but that hasn't stopped it from ballooning in popularity. Miami, in particular, has emerged as America's epicenter of the BBL, drawing clients who fly in from around the world, lured by cut-rate prices, an abundance of plastic surgeons (8.3 per 100,000 residents as of 2018), and, as the New York Times Magazine recently noted, a formidable network of post-op recovery houses.

New Times caught up with our go-to BBL expert Dr. Michael Salzhauer (AKA Dr. Miami), the Bal Harbour plastic surgeon famous for livestreaming his procedures on social media, to talk tushies and the booty boom. The conversation below has been edited for length and clarity.

New Times: Do you remember your first BBL?

Dr. Miami: Gosh, that's a good question. I know I remember vaguely where it was. I wish I could say I remember the actual patient. I can't say that I do remember the first BBL.

Do you remember your last BBL?

I'm not that old. My most recent BBL was literally, like, yesterday. It was Thursday.

How many BBLs have you done in your lifetime?

Five thousand sounds like a right number. [yells to someone in background] Rosie, how many BBLs in my lifetime?

How has the popularity of plastic surgery — specifically BBLs — changed in Miami over the years?

When I first started in practice in 2003, there weren't that many surgeons doing the BBLs. And the demand was obviously not as high. I think somewhere around 2008, 2009, maybe when the Kardashians hit the scene, Nicki Minaj was blowing up, and obviously J.Lo — I think those are the major cultural figures — the watershed moments, so to speak, where people started appreciating bigger booties in the general culture. And Miami, being bikini weather all year round and having a good amount of plastic surgeons and somewhat of an influence from South America, I think it was the perfect place for the BBL boom to begin. And it did begin here.

It's called the Brazilian butt lift, but we do more BBLs here than the whole country of Brazil. And then slowly but surely, more surgeons got trained in it. At this point, people fly from all over the world to have their BBL done in Miami. But again, the cultural moment was around 2008, 2009, I would say. It's been building for the last ten to 15 years.

Where is the furthest that someone has traveled to you for a BBL?

Australia –– and more than one!

Do you think Miami is currently experiencing a "BBL boom"? Or is it ending?

No, no. It doesn't show any signs of slowing up at all.

Can you talk a little bit more about why you think Miami has become such a BBL destination?

One reason is the number of surgeons who practice here and do the operation. You know, if you go to the middle of the country, or even LA or New York, you'll find much fewer plastic surgeons that do BBLs. So this is like the Mecca, so to speak, of BBL surgeons. That's the first thing: There's a good supply of surgeons. Secondly, because there's a lot of surgeons that do BBLs, the price in Miami is better than almost every other city in America. And the flights to Miami are fairly cheap. So those are the economic reasons.

The idea of a surgery center, like a place where there'll be ten or 15 operating rooms, ten or 15 surgeries at once, all utilizing the resources together –– as far as I know, that started here in Florida, and in Miami specifically. So when the boom happened, they were able to take advantage of all those things. And so just the sheer volume that those centers could produce. You know, people go back to other places and they tell their friends that they came to Miami for their BBL, then their friends come, and so forth.

Miami has been a plastic surgery travel destination for a long time. More than New York, and certainly on par with LA and Beverly Hills.

How does one "lift" a butt?

It's a little bit of a misnomer, because we're not actually lifting, like cutting and lifting like you lift a breast. It's more like inflating a balloon that's been deflated.

So if you can imagine, as you get older, and gravity and so forth, things kind of fall down. We're just putting more fat in to re-inflate it again. Or for people that never had a butt, we're now making new space and putting fat from areas of the body they don't want it and putting it in the place where they do. And that makes it look bigger and lifts it, so to speak.

Is the BBL your most popular surgery?

How much should one be willing to pay for a good BBL in Miami?

It's more about the safety –– the price should really be secondary for most people.

Do you get nervous doing BBLs because of the high death rate associated with the surgery?

No, not really. I've been practicing for 20 years, I'm board certified, no one's ever died in my practice. I've never been sued for malpractice. I'm very confident in the technique that I've been using for the last 20 years. Plus, we have other safety measures in place. I have an ultrasound machine where I can actually see where the fat is going. My experience makes me more confident.

I could see how a younger surgeon or someone with less experience — they should be nervous, you know, and rightfully so. Because you know the risks involved. But in my hands, it's very safe, and I feel very confident. So I don't get nervous doing it.

Which body shape and celebrities are most often cited to you by clients as inspiration?

Right now, the upside-down heart shape is the most requested — meaning it kind of slopes like an upside-down heart where it's more in the hips, and there's like a longer lower back-to-butt curve ratio. A few years ago, it was more like the shelf look was in, you know, where you put a drink on the top of it, or a tray of hors d'oeuvres. But now it's more of a sloping, longer torso and more of a heart shape.

There's less of a demand for a specific celebrity and more of just, you know, Instagram-famous people that have nice bodies. Sometimes they'll bring pictures of the same person but from a specific angle. They're like, "I don't like how their butt looks here, but I like how it looks here." And I'm like, it's the same butt!

Has an influencer ever come to you asking for a free BBL in exchange for content?

And what was your answer?

I mean, look, I'm willing to negotiate to a certain point. But yeah, there are people that come in and ask for free stuff all the time. And to compensate for that, I do like to give back to the community. I do giveaways, I do free BBLs. If you look through my social media, you'll see every year I do a few Mommy Makeover giveaways, BBLs, and that sort of thing. Just because some people can't afford it at all, and I don't want people to feel like they'll never have a shot at it, you know?

Is there anything else you think is important to mention about the BBL boom or BBLs in general?

I think the main thing is safety. There's an organization called the World Association of Gluteal Surgeons, and it's hundreds of surgeons around the world that are all focusing on making the BBL safer and safer. We have a new training program for younger surgeons where we show them how to inject with the ultrasound.

I feel like the BBL is moving towards the stage where your surgeon will need to be certified specifically in the BBL to do it safely, and maybe even legally. So that's something I think that the profession is moving towards. I don't think we're there yet, but definitely, when you pick a BBL surgeon, look at their experience, look at their record, and make sure that you're safe. Because it doesn't matter how good you look if the safety is not there.
KEEP MIAMI NEW TIMES FREE... Since we started Miami New Times, it has been defined as the free, independent voice of Miami, and we'd like to keep it that way. With local media under siege, it's more important than ever for us to rally support behind funding our local journalism. You can help by participating in our "I Support" program, allowing us to keep offering readers access to our incisive coverage of local news, food and culture with no paywalls.
Make a one-time donation today for as little as $1.