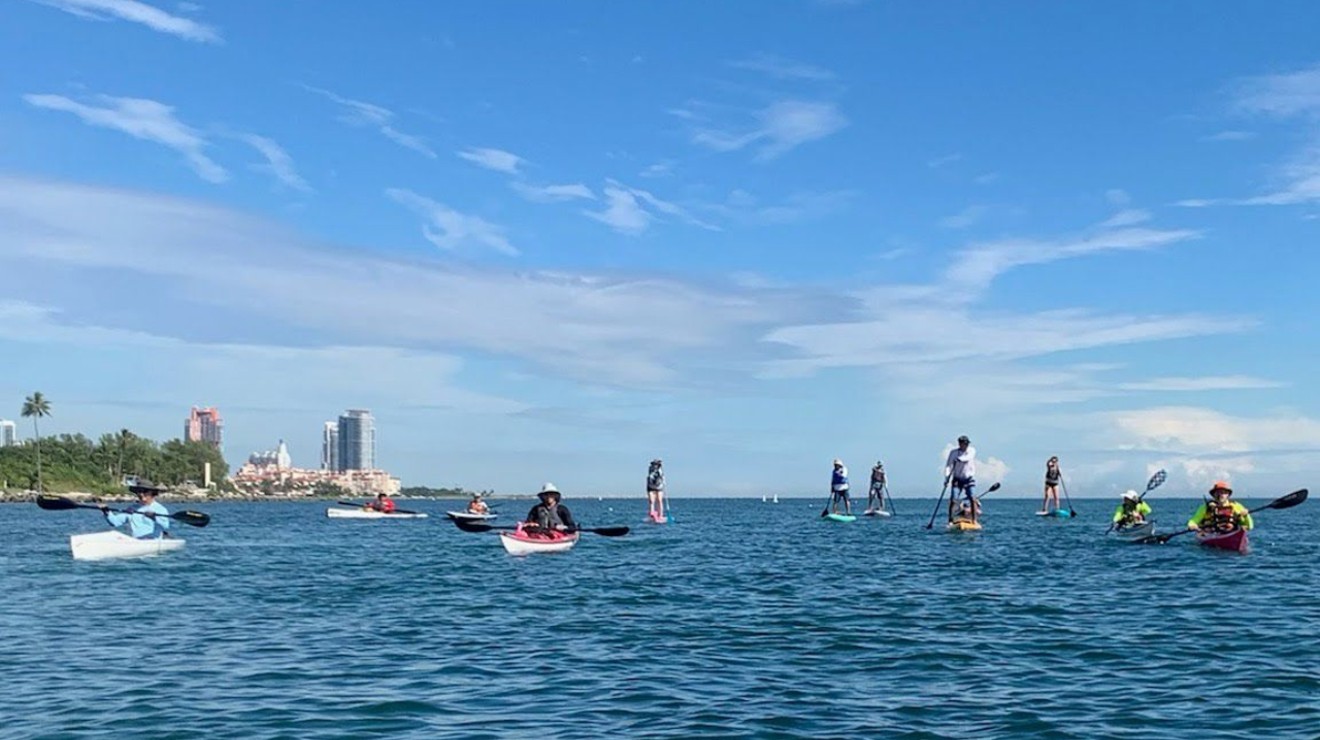 Paddlers, kayakers, and bicyclists are gathering on Virginia Key this weekend to protest a widely scorned proposal for a homeless "transition and transformation zone" on the island. Photo by David Chen via South Florida Paddlers
After a controversial vote that may lead to a "tiny home" homeless encampment on the island of Virginia Key, outdoors groups are taking to the land and water to voice their shared opinion: This is a bad idea.

On Saturday, August 5, members of the South Florida Paddlers group, the Miami Rowing Club, and the Virginia Key Bicycle Club will stage separate demonstrations around Virginia Key, following last week's move by City of Miami commissioners to study a pilot program for a "homeless transition and transformation zone" on the island, in proximity to existing mountain biking trails and a paddling area.

"We're doing a protest paddle. We want to show commissioners that this is a place used by a lot of people, specifically by paddlers, so we're gonna show up in strength," David Chen, administrator for South Florida Paddlers, tells New Times.

More than 100 paddlers and kayakers are expected to take to the waters of Biscayne Bay at 10 a.m. for a "paddle protest," followed shortly thereafter by droves of cyclists expected to participate in a bike gathering at 11 a.m., according to Virginia Key Bicycle Club treasurer John Voss.

"The point of this weekend’s ride is to remind the city that this park is is an asset, it's our gift to the city," Voss tells New Times. "We think homeless people should have a place, but if it's done here I think it will discourage people from taking advantage of this great gift Miami has."

Voss is careful to explain that the bicycle club's event is not a protest with picket signs, but rather a large ride where children and families are invited to show support for the biking trails as they are, and to "counter Miami officials' statements that the trails are not used and dangerous," according to the group's Instagram flyer.

The potential for a homeless encampment has already drawn overwhelming disapproval from the Virginia Key Outdoor Center and other outdoors groups and businesses that operate on the island. An online petition decrying the plan has tallied over 13,000 signatures to date.

The plan has also received pushback from homeless advocates who say it wasn't something they sought, nor will it help to end homelessness.

"Most people never consider that the homeless are never consulted on ideas that are ostensibly for their benefit. This is just another crazy idea from Joe Carollo that has nothing to do with what people need," says Jeff Weinberger, founder of the October 22nd Alliance to End Homelessness.

Weinberger says he and other advocates have serious concerns about the proposal, including the island's distance from existing social services, the difficulty medical services would have transporting someone from the barrier island — which is separated from the rest of the city by a mile of water in Biscayne Bay — in the event of an emergency, not to mention the likely lack of freedom for those who are taken to the encampment.

Several detractors have likened the idea to a dystopian prison camp.

"This proposal resembles much more like a concentration camp than anything we would call housing," Weinberger says. "Who would call it housing when you're being monitored 24/7 by security guards and can't so much as drink a beer?"

The public is invited to join either the paddling or the biking protest (or both). The South Florida Paddlers demonstration will be preceded by speeches, and the cycling club will distribute petitions before hitting the beginner mountain bike trails.

Both groups say they hope Miami city commissioners will attend to get an idea of the island's value in its current configuration.

"We invite all commissioners to come out and see what the park is about," Voss says.
KEEP MIAMI NEW TIMES FREE... Since we started Miami New Times, it has been defined as the free, independent voice of Miami, and we'd like to keep it that way. With local media under siege, it's more important than ever for us to rally support behind funding our local journalism. You can help by participating in our "I Support" program, allowing us to keep offering readers access to our incisive coverage of local news, food and culture with no paywalls.
Make a one-time donation today for as little as $1.