The Florida Wildlife Corridor Itself Is Endangered One of two 2-year-old Florida panthers that were released into the wild on April 3, 2013. Photo by Joe Raedle via Getty Images
If Florida's natural environment is a board game, creating the Florida Wildlife Corridor is how you win: Connect its disparate pieces to form a contiguous pathway so native animals like panthers and black bears can move from one end of the state to the other. (Sorta like this.)

Passed in July of 2021, the Florida Wildlife Corridor Act mandated that the state "create incentives for conservation and sustainable development while sustaining and conserving the green infrastructure that is the foundation of this state’s economy and quality of life."

The goal is to preserve 18 million acres of undeveloped land so native animals and water can migrate unimpeded, even as Florida's human population continues to expand. But the legislation itself is somewhat symbolic, in that the animals will pay the penalty if the humans don't uphold the law.

"It helps to inspire folks," sums up Jason Lauritsen, chief conservation officer of the Florida Wildlife Corridor Foundation. "Now there's this unifying vision that so people can recognize that work done in the Panhandle prioritizes a connected system that goes down Florida Bay. "

In the past year, Lauritsen says, 35,000 acres were preserved within the corridor, bringing the total amount of conserved lands to about 10 million of the targeted 18 million acres.

That said, conservation will have to speed up significantly in order to reach the state's environmental goals and protect Florida's natural treasures.

"We need to accelerate the pace of our conservation," Lauritsen asserts. "By 2030, we feel like we need to conserve another 900,000 acres. That’s a big number. That means we’ll need to take more than 100,000 acres a year in conservation." 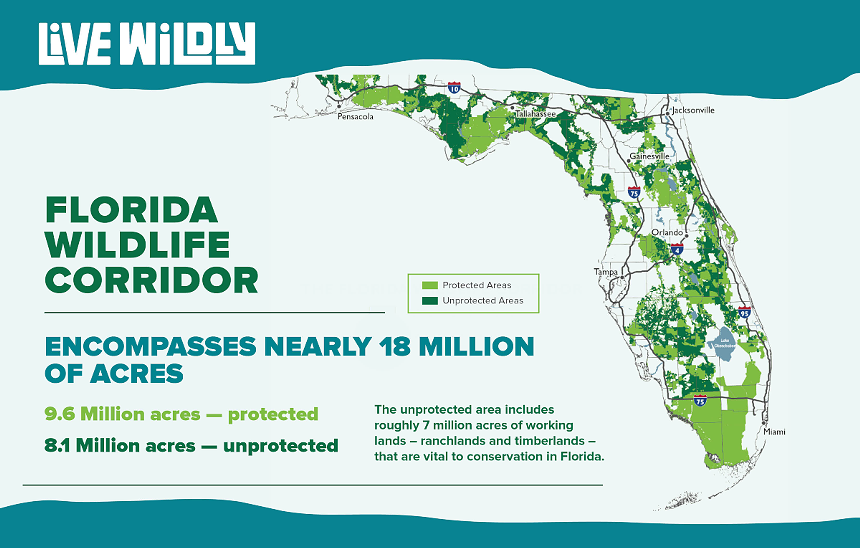 LiveWildly.com provides an interactive map for visitors who seek to explore the Florida Wildlife Corridor.
Graphic via LiveWildly.com
Meeting that goal will require local governments, conservationists, and the State of Florida to get creative about filling holes in the corridor. That might mean a local parks department acquiring more acreage for an environmental park, or the foundation negotiating with farmers and ranchers to leave some portions of their fields open and undeveloped for wild animals to move through.

Given Florida's increasing population, Lauritsen says, preserving the corridor sometimes requires speaking with real estate developers and persuading them to design projects in a way that allows for open green space for wildlife, as opposed to isolated patches of grass.

"So many people are moving to the state, so there's demand for more homes, more water supply, more commercial areas," Lauritsen notes. "The challenge is: How do we design, develop, and zone communities responsibly? It's an immediate and pressing need to plan development with the corridor in mind."

In South Florida, much of the remaining Everglades is already preserved, but there are gaps between critical areas like Big Cypress National Preserve west of Fort Lauderdale and Caloosahatchee Regional Park northeast of Fort Myers. Those protected areas are connected by private land the foundation considers "critical linkages" that will have to be protected in order to make the corridor a reality.

To get Florida residents more involved in conservation across the state, environmental advocates founded the nonprofit LiveWildly Foundation earlier this summer. The foundation manages a website, LiveWildly.com, where Floridians — including urban residents in Miami who aren't familiar with state forests or parks — can use interactive maps to explore the Florida Wildlife Corridor and, ideally, follow that up in real life and contribute to the state's conservation efforts.

"What I’d like folks to do is get out there and appreciate the rest of wild Florida they might not know. A lot of people that live in urban footprint aren't aware of how amazing and wild these places are," Lauritsen says.
KEEP MIAMI NEW TIMES FREE... Since we started Miami New Times, it has been defined as the free, independent voice of Miami, and we'd like to keep it that way. With local media under siege, it's more important than ever for us to rally support behind funding our local journalism. You can help by participating in our "I Support" program, allowing us to keep offering readers access to our incisive coverage of local news, food and culture with no paywalls.
Make a one-time donation today for as little as $1.