Ten Locally Crafted Spirits That Are Made For Miami 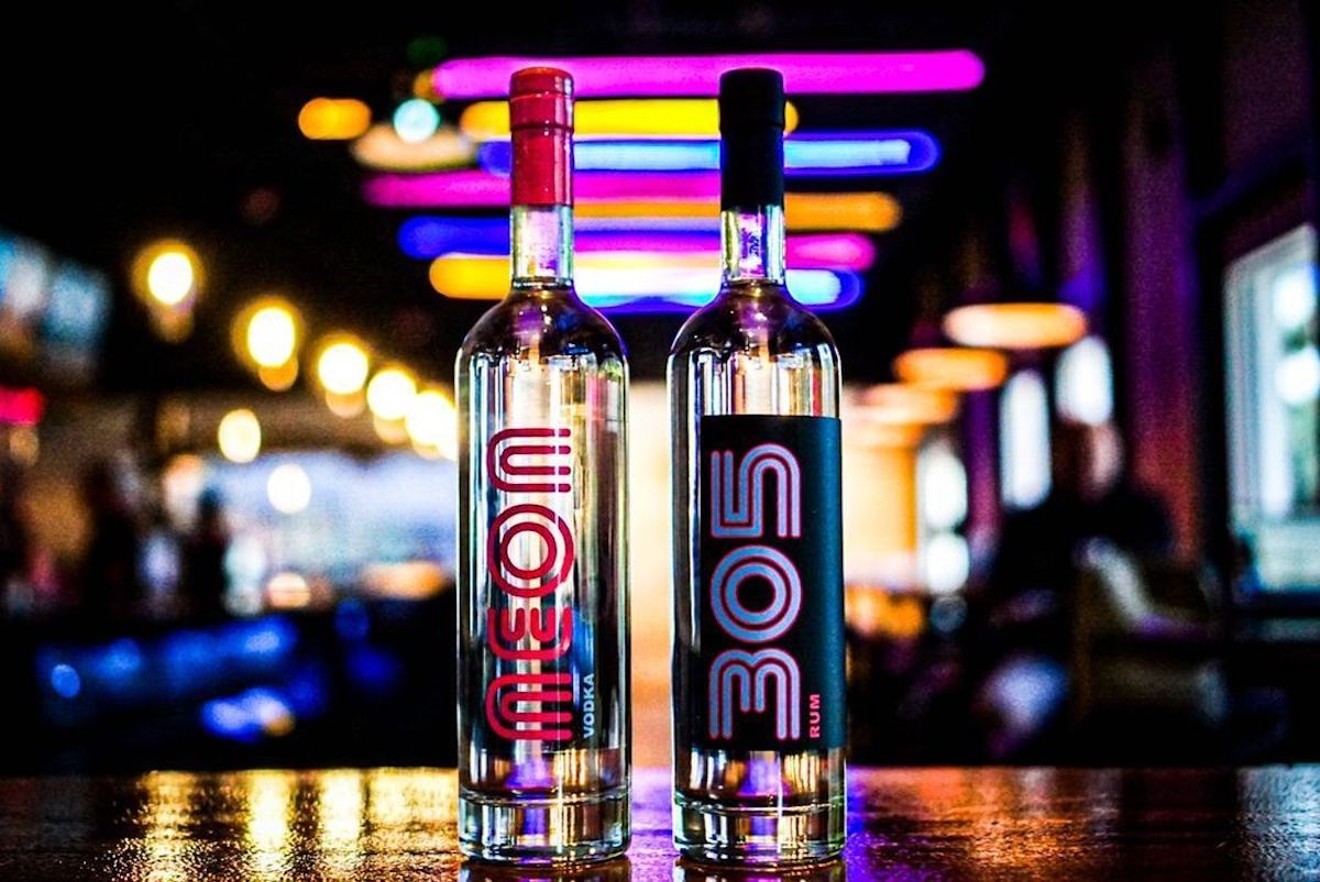 MIA Spirits is housed inside MIA Beer Company in Doral. Photo by Alex Gutierrez
South Florida is home to a growing number of spirits brands that are crafting some truly tropical gins, vodkas, rums, and liqueurs.

Love martinis? There's an espresso liqueur for that. Sipping fruit-flavored brandy? There's a distillery that claims it as a specialty. Enjoy coconut-infused libations? Several brands have unique ways of using them for flavoring and even filtering.

With the growing number of Florida distilleries over the past several years, the Florida Craft Spirits Association, a membership organization consisting of 44 Florida distilleries, has announced the official launch of the Florida Distillery Trail, a multi-stop distillery tour that traverses the entire Sunshine State. Lucky for us, a growing number of them are right here in South Florida.

If you want to map out your own trail, it's easy to do from the comfort of your couch — or by visiting any of the following Florida distillery tasting rooms for some very Miami-inspired offerings. 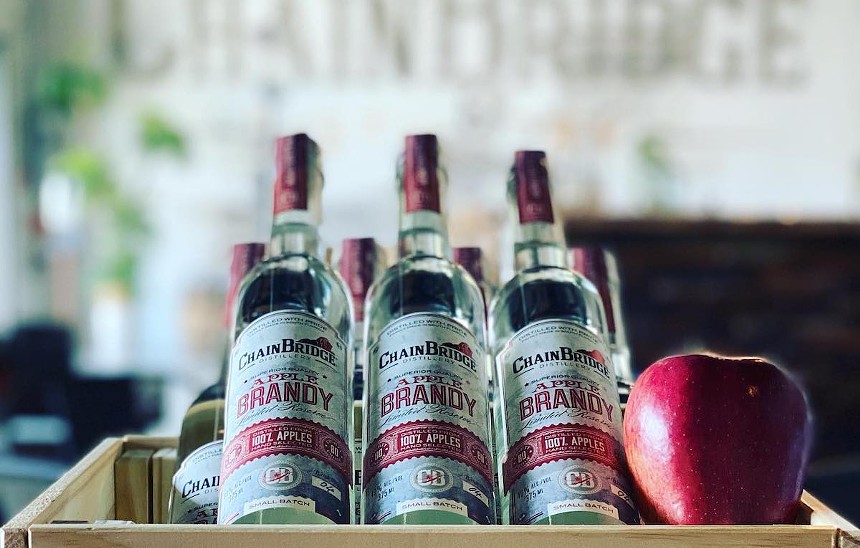 3500 NE 11th Ave., Oakland Park
954-900-3924
chainbridgedistillery.com
For three years, ChainBridge Distillery owner/distiller Bela Nahori has been crafting some truly noteworthy spirits from his Broward County-based distillery alongside his parents, Bela Nahori Sr. and Agnes. Hailing from the Tokaj wine region that borders Hungary and Slovakia, his specialty is his take on pálinka, an eau de vie style of fruit brandy. In Fort Lauderdale, he offers a unique South Florida twist with a wide range of brandies. Made in small batches, each is distilled from fresh fruit the family hand-washes and processes for several days before it's pressed to extract juices that are mixed with a special European yeast. The mash ferments for two weeks and ages for at least three months before it's hand bottled and labeled, building a body and character that is unique to each fruit sans added sugar or flavorings. To date, Nahori has created a number of iterations including banana, blueberry, apple, pear, basil, and plum — even spirits made from carrot and beet. Keep an eye out for a new release: his first mango brandy aged for a total of three years with one year in bourbon barrels. The tasting room offers samples, cocktails, and a retail shop. Noon to 5 p.m. Monday through Thursday, 12 p.m. to 8 p.m. Friday and Saturday. 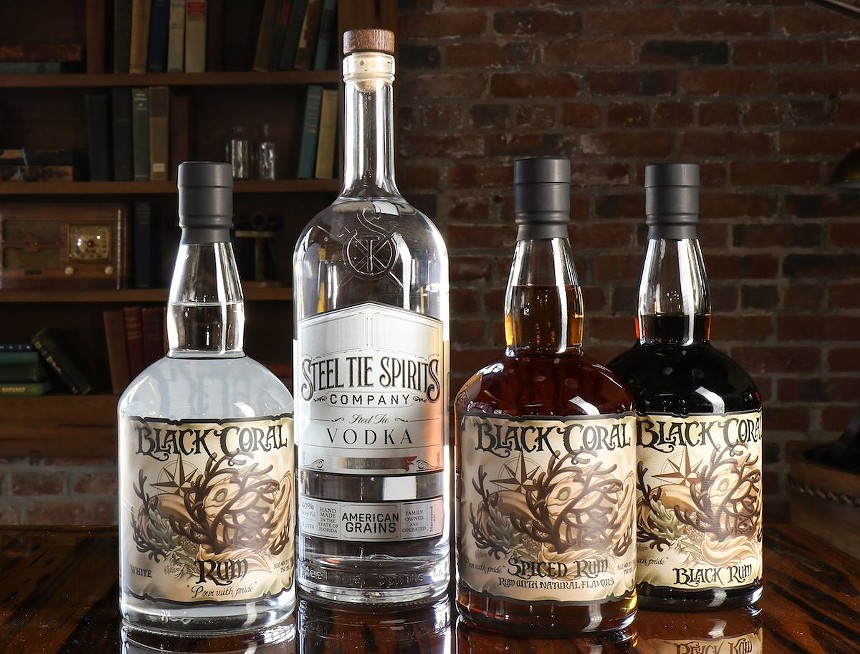 1615 Clare Ave., West Palm Beach
561-623-0961
steeltiespirits.com
When father and son duo Ben and Clint Etheridge began making rum in the summer of 2012, they aimed to create a product for Florida using local ingredients. What began as Black Coral Rum in Riviera Beach has now grown to a full-fledged distillery in West Palm Beach. Today, you can find three iterations of Black Coral, all made using pure molasses from sugar cane crops in Clewiston, Florida. The resulting liquid is aged for six months in new American white oak barrels before being filtered through Florida coconut husk, removing esters in the most natural, sustainable, and Florida way possible. The spiced rum is flavored with real Madagascar vanilla beans, while a black rum gets its dark hue and robust profile with the addition of raw blackstrap molasses, baker’s caramel, and spices like clove and anise. The tasting room offers samples, cocktails, and a retail shop. 2 to 10 p.m. Thursday through Sunday.

coconutcartel.com
In 2012, Miami-born Mike Zighelboim would fly from Miami to El Salvador to visit his father. After a hot day on the golf course, a friend gave him a fresh coconut to drink. It was so crisp, refreshing, and delicious that he decided to smuggle a few home in his suitcase. From there, an idea was born: Maybe he could start a business selling these fresh coconuts to hotels for their pool and beach venues. That idea turned into Coconut Cartel, a rum company founded by Miami residents and brother-sister duo Mike and Danielle Zighelboim. Together, they created a riff on the classic Guatemalan sipping rum made with coconut water. It starts off with a reserve selection of the finest single-origin Guatemalan añejo rum watered down with fresh-harvested coconut water, bringing it from cask to bottle strength. A distillery in Guatemala presses the brand's own sugarcane, then ferments, distills, and barrels the rum in American white oak for 4-12 years. From there, regionally grown coconuts known for their mineral content and nutty, sweet, and salty flavor lend their juice for the final touch before bottling.The resulting rum isn't overly sweet, but instead exhibits a uniquely smooth taste that is both delicate and balanced — perfect for solo sipping or mixing into cocktails. There is no tasting room but bottles can be purchased on the Coconut Cartel website.

1110 NE Eighth Ave., Fort Lauderdale
954-541-2868
southfloridadistillers.com
South Florida Distillers founders Avi Aisenberg and Joe Durkin debuted their small-batch spirits operation in 2014, launching with a white rum dubbed Fwaygo. Today, the Fort Lauderdale-based distillery and tasting room also functions as an incubator program, offering contract manufacturing and labeling services for start-up spirits brands. While you can visit the tasting room to sample any of the distillery's in-house spirits, guests can also sign up for the distillery's two hour make-your-own-gin class where attendees can pair up or work solo to craft their own signature gin using a 192-proof vodka made from American wheat that is further distilled during the class, using up to 24 botanicals that range from dried herbs and spices including chamomile, clove, and licorice root to more obscure picks like orris root, rosebuds, and wild cherry bark. Don't leave without a taste of the Grilled Pineapple Fwaygo, which started as a limited batch run and is now a permanent offering flavored with pineapples coated in cinnamon and sugar, grilled over an open flame, and soaked in rum for several months. 4 to 10 p.m. Wednesday through Friday, and from noon to 10 p.m. on Saturday.

82229 Overseas Hwy., Islamorada
305-440-2162
islamoradabreweryanddistilling.com
Islamorada Beer Company head brewer Stephanie Harper is the literal wonder woman brewer and distiller behind the award-winning beer and spirits that share the same name. Alongside a small and dedicated team, Harper is crafting both suds and spirits from the brand's Keys-based and Port St. Lucie brewery and distilleries, a lineup that includes so many tropically-inspired offerings, it's impossible to list them all here. That's why it's incredible to imagine she's also the recipe crafter behind a silver, spiced, single-barrel aged, and dark barrel-aged rum, as well as a small-batch gin and vodka. A standout Florida favorite, however, is the hibiscus-infused gin. The spirit is distilled from corn and flavored with a botanical basket that marries juniper, coriander, angelica, orris root, orange peel, cardamom, and butterfly pea flower that changes from vibrant purple to pale pink after reacting to added citrus or tonic water. The bold flavor of hibiscus and juniper are incredibly recognizable, along with a light citrus bite that finishes with a touch of vanilla. Islamorada tasting room open from 11 a.m. to 9 p.m. Sunday through Thursday, 11 a.m. to 10 p.m. Friday and Saturday.

13995 SW 144th Ave., Miami
786-228-9740
bigcypressdistillery.com
Opened in 2016, Big Cypress Distillery cofounder Fernando Plata is proudly self-taught. His hybrid pot and column still allows him to create a variety of spirits and fruit liqueurs, but for a taste of something you'd be hard-pressed to find elsewhere, try one of two limited edition sloe gins. Each is crafted from the distillery's Magic City gin that's further flavored with lychee, sloe berries, and sweetened with a blend of mangrove honey sugar before it's aged between 18 to 36 months in port barrels. The resulting spirit makes a perfect sloe gin fizz, or simply sip and enjoy it solo. Keep your eye out for the limited release of Plata's orange spiced rum, available once each year. The spiced rum is given a touch of sweetness from mangrove honey before it's aged three years in charred new American oak barrels, matured with a medley of citrus including Florida orange peels and bitter orange, cacao nibs, vanilla, cinnamon, and allspice. 5 to 11 p.m. Thursday and Friday, and 5 p.m. to 1 a.m. on Saturday.

7401 NW Miami Pl., Miami
844-644-2582
miamiclubrum.com
Miami Club rum is now hand-blended with coconut and Florida sugar crystals for a real taste of Miami. It all started when the distillers discovered the world’s leading brand of coconut rum is artificially flavored. To remedy the situation, they created Miami Club Coconut Grove, which is hand-blended with Miami Club rum, organic coconut, and organic raw Florida sugar crystals. 11 a.m. to 6 p.m. Tuesday through Saturday.

MIA Beer Company has expanded with an in-house line of spirits.
Photo by Alex Gutierrez

10400 NW 33rd St., Doral
786-801-1721
mia.beer
When MIA Beer Company owner/cofounder Eddie Leon announced he was ceasing Florida distribution of his beer, the bad news was made more palatable with some good. Instead, he would be focusing on adding a new product lineup from his busy Doral taproom with the addition of MIA Spirits. To date, the distillery is producing a number of spirits including the brand's six-time distilled, grain-based Neon vodka, un-aged Caribbean-style 305 rum, as well as a one and four year American oak-aged rye whiskey. The word on the street is that MIA has purchased land to build a destination-worthy distillery and brewery for a farmstead-style experience in Florida. 4 to 11 p.m. Monday and Tuesday, 12 to 11 p.m. Wednesday, 12 p.m. to 12 a.m. Thursday, 12 p.m. to 1 a.m. Friday and Saturday, and 12 to 10 p.m. Sunday.

This Florida brand is made for Miami.
Photo courtesy of Duke & Dame

dukeanddame.com
South Florida-based whiskey brand Duke & Dame was born over a casual conversation over dinner in 2017 between an investment banker and an international trade advisor after ordering a round of shots. The idea to create a salted caramel whiskey instantly came to the mind of cofounder Chima Burey when Amani Macaulay asked him what type of spirit he would make for himself. With a distillery based in Jacksonville and a label created in Miami Lakes, the duo prides themselves on a truly local spirit. Each sip brings sweet notes of caramel, vanilla, and butterscotch. There is no tasting room, but locals can find it at Total Wine & More, ABC Fine Wine & Spirits, and other select South Florida retailers.
KEEP MIAMI NEW TIMES FREE... Since we started Miami New Times, it has been defined as the free, independent voice of Miami, and we'd like to keep it that way. With local media under siege, it's more important than ever for us to rally support behind funding our local journalism. You can help by participating in our "I Support" program, allowing us to keep offering readers access to our incisive coverage of local news, food and culture with no paywalls.
Make a one-time donation today for as little as $1.