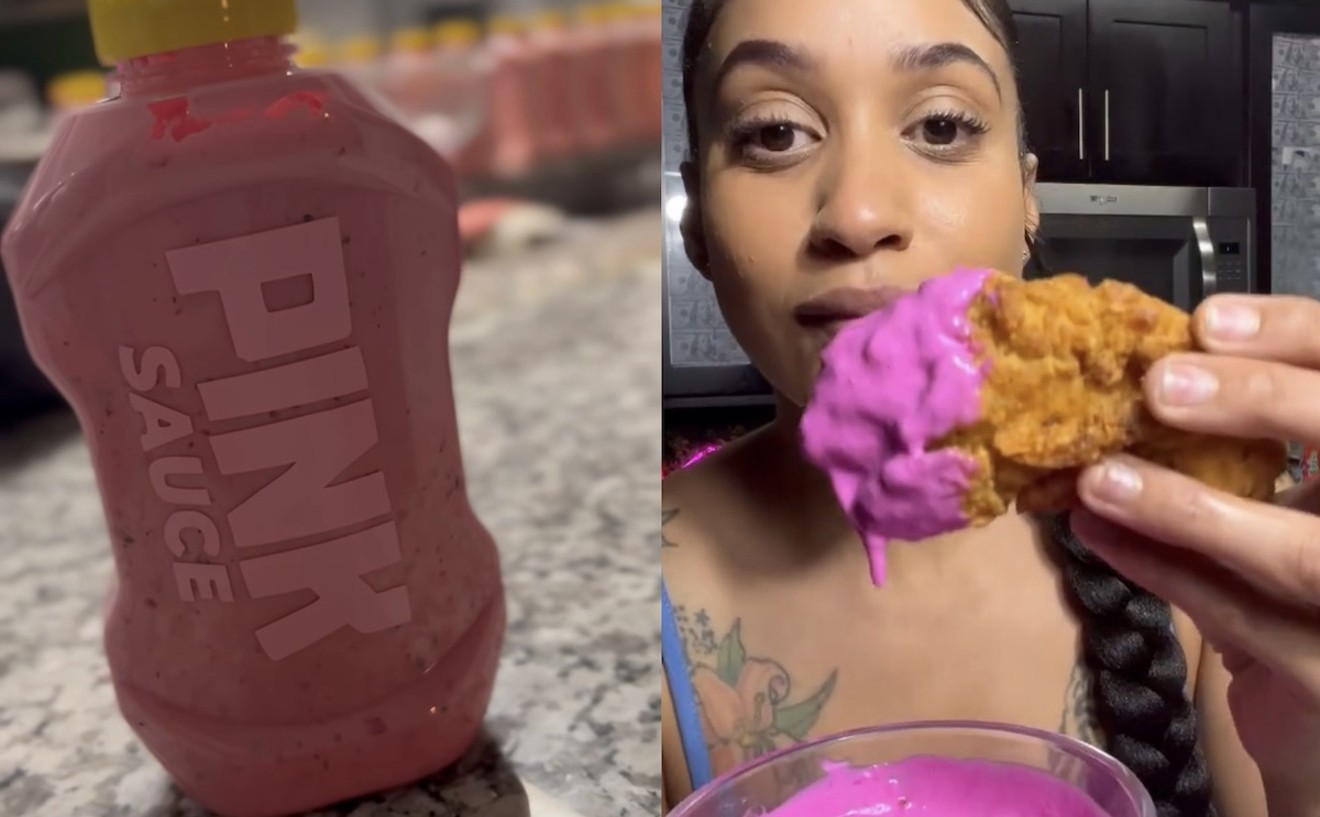 New Times caught up with Pii, the 29-year-old Miami native behind the pink sauce. Screenshots via @chef.pii on Instagram
It's pink. It's a sauce. But what the hell is it?

That's a question that's been on everyone's mind for the past month, ever since Miami Gardens-based TikTok creator Chef Pii (AKA Pink Sauce Queen) began posting videos touting her new product, a condiment she calls Pink Sauce. According to the product's website, it's made with sunflower seed oil, raw honey, chili, garlic, and dragon fruit (which gives it its pink color). Chef Pii (pronounced pea, like the vegetable) claims the sauce pairs with everything from chicken wings to tacos to gyros.

Her posts piqued interest, but when people began asking Pii to describe what the sauce tasted like, she offered vague answers like, "It's sweet, savory, seasoned," and, "It has its own taste." It didn't help that the sauce appeared to change in hue from one video to the next, looking like Pepto-Bismol in some and in others like a pink-tinged ranch dressing. More recently there were claims about typos on the nutritional label and suggestions that Pii wasn't complying with so-called cottage food laws — regulations that specify whether and how products can be manufactured in home kitchens.

Priced at an eyebrow-raising $20 (plus at least $8 for shipping), the sauce quickly became the center of a viral internet drama, which has moved from TikTok, where the hashtag #pinksauce has attracted more than 82 million views, to Twitter, where it is currently trending.

New Times caught up with Pii, the affable, 29-year-old Miami native behind the pink sauce. Reached by phone, she attributes the bumpy road to retail to growing pains.

"This has only been a product for 20 days," she points out. "So, with that being said, just like any other business, they have times when, you know, they mess up."

Pii, a private chef based in Miami, says she began selling Pink Sauce in late June after serving it informally to clients and others for more than a year at her takeout restaurant, Flavor Crazy, where she drizzled the sauce — not to be confused with Italian pink sauce (AKA vodka sauce) — on dishes like wings and sandwiches for customers.

When she announced the product last month, Pii says, people were immediately curious  — specifically as to its flavor.

"It blew up from people who were like, 'Well, what does it taste like?" Pii recounts. "And it has its own taste. So basically I'm like: I can't compare it to anything. It has its own flavor, so you have to purchase it to taste it. And they took it as me being rude when I was just being real."

Adds Pii: "And you know, being from Miami, we're just kind of straight to the point, how we talk. Like, no ill intent. And what I said — it was just the truth."

It wasn't until June 25, when Pii offered the item online for presale, that she revealed the aforementioned key ingredients.

The first round of orders began arriving last week, and real problems began to surface.

TikTok users posted videos of the product's label, which misspelled "vinegar" and claimed one bottle contained 444 servings of the sauce. One person couldn't locate an expiration date on their bottle. Some worried it was too dangerous to try.

More to the point, a number of people expressed concern that the product, which was shipped unrefrigerated in a box, contains milk and might be perishable.

Pii addressed the servings snafu on TikTok (there are 30 one-tablespoon servings in a 15-ounce bottle) and says that while the label should have included an instruction to "refrigerate after opening," Pink Sauce is shelf-stable until its expiration date.

According to Pii, 700 bottles of the sauce have been sold so far. She says she's been processing refunds for dissatisfied customers, a number she pegs at between five and ten to date.

Apart from processing refunds, the company has halted production to address customer concerns and label issues, which Pii attributes in part to "simple" typos on the part of her graphic designer.

"We want our customers to know that we care about their health and safety before anything," she says. "You know, we want our labels to be right. So we're redoing everything. If we have to redo the bottle, then we have to redo it, you know."

Pii adds that she's taking the setback as a learning experience and working to move forward from it, given that this is the first food product she has ever brought to market. She intends to share a statement on her YouTube channel tonight addressing customer concerns.

"We're just making improvements as time goes. We're moving rapidly," she says. "When you do something great, it's not expected to have any discrepancies. You know, it's just like when you go buy a Gucci bag: You don't want that bag to have scuffs, right? So I take it as we're supposed to be superior. We're the best. And we're doing everything to be the best. Because we are the best."
KEEP MIAMI NEW TIMES FREE... Since we started Miami New Times, it has been defined as the free, independent voice of Miami, and we'd like to keep it that way. With local media under siege, it's more important than ever for us to rally support behind funding our local journalism. You can help by participating in our "I Support" program, allowing us to keep offering readers access to our incisive coverage of local news, food and culture with no paywalls.
Make a one-time donation today for as little as $1.