The naturally fermented and leavened dough is crunchy and flavorful, rendering it the perfect vessel for toppings like preserved lemon and Calabrian chili flecked with fresh sprigs of dill or a rich and aromatic probiotic-boasting truffle cashew cream cheese.

Despite a new bagel obsession, Slawson's passion for bringing healthy, creative cuisine to South Florida began years ago with Christopher’s Kitchen, a restaurant he opened in Palm Beach Gardens in 2011. For years it operated as a spot for healthy to-go fare, but several months before the pandemic, the chef sold his stake in the partnership for a move further south.

Then, just weeks ago, Slawson pivoted focus, turning the market entrance of his 5,000-square-foot restaurant into a space for his latest passion: bagels.

"I really wanted to make something different, something Miami doesn't have right now and landed on the bagel," Slawson tells New Times. "I've always loved making dough, and I love bagels. I decided to create a sourdough bagel that's super crunchy with just a hint of chew. It's nothing like a New York-style bagel." 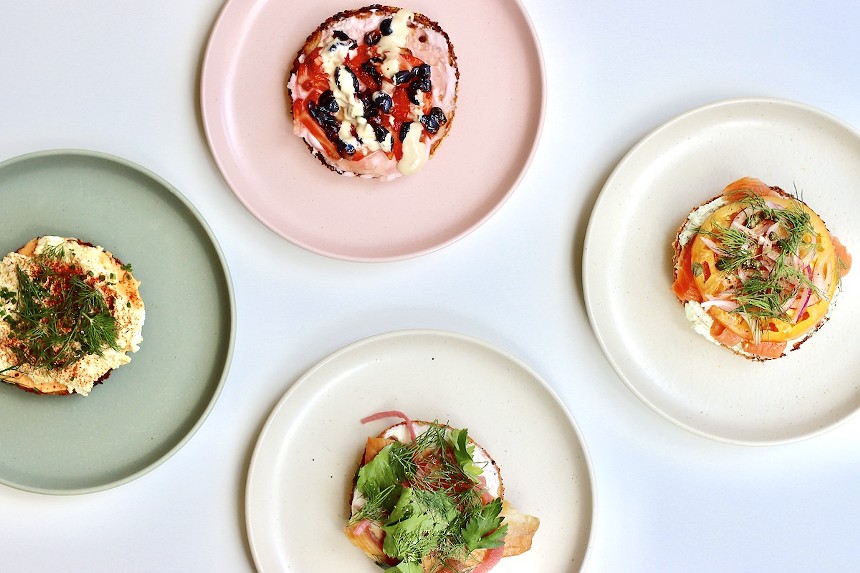 Sour Seed offers a curated array of open-faced sandwiches served on house-baked sourdough bagels.
Photo by Nicole Danna
And, of course, there are the bagels.

Over the last few weeks, Slawson, alongside a small team he matriculated from Thatch, has been hard at work transforming the restaurant into a bagel haven.

As part of that process, Slawson says he's been pursuing bagel-baking mastery, tweaking his Montreal-inspired recipe daily to ensure it's "just right." The end result is a thinner, denser bagel made from a dough that ferments for 24 to 36 hours before it's boiled in molasses-sweetened water and baked to a crispy, slightly burnt shell. Flavors include onion, poppyseed, sesame, everything, and plain.

Not unlike traditional smørrebrød piled with toppings like pickled herring, schmears of cheese, or mounds of plump shrimp, the open-faced bagel sandwiches at Sour Seed feature an array of toppings that highlight a house-made cream cheeses and specialties like smoked river trout, smoked salmon, and a divine egg salad.

From Slawson's short and sweet menu, customers can also build their own sandwiches using those house-made schmears, each derived from a base blend of organic cream cheese, sour cream, and lemon juice that whips into light, freshly-flavored spreads. Current iterations include an herb blend of chive, dill, and parsley; pimento; seasonal fruit; and preserved lemon with Calabrian chili.

The real novelty is the chef's vegan probiotic cashew cream cheese. Available plain or accented with truffle, it has a rich flavor and smooth, creamy texture that belies its true nature. Tell us it's regular cream cheese, and we'd believe you.

Whatever you do, don't miss the "Sweet & Salty," a bagel of your choice layered with the seasonal fruit spread, whipped tahini, honey, fresh berries, and crunchy flakes of Maldon sea salt.

"Put too many things on a menu, and it's too hard to keep the quality consistent," says Slawson. "That was the motivation for me — give Miami something special, and try to make the perfect bagel sandwich."

Sour Seed. 3255 NE First Ave., Miami; 786-655-4945; sourseedbagels.com. Monday through Friday 8 a.m. to 3 p.m., Saturday and Sunday 8 a.m. to 4 p.m.
KEEP MIAMI NEW TIMES FREE... Since we started Miami New Times, it has been defined as the free, independent voice of Miami, and we'd like to keep it that way. With local media under siege, it's more important than ever for us to rally support behind funding our local journalism. You can help by participating in our "I Support" program, allowing us to keep offering readers access to our incisive coverage of local news, food and culture with no paywalls.
Make a one-time donation today for as little as $1.