The Ten Best Burgers in Miami 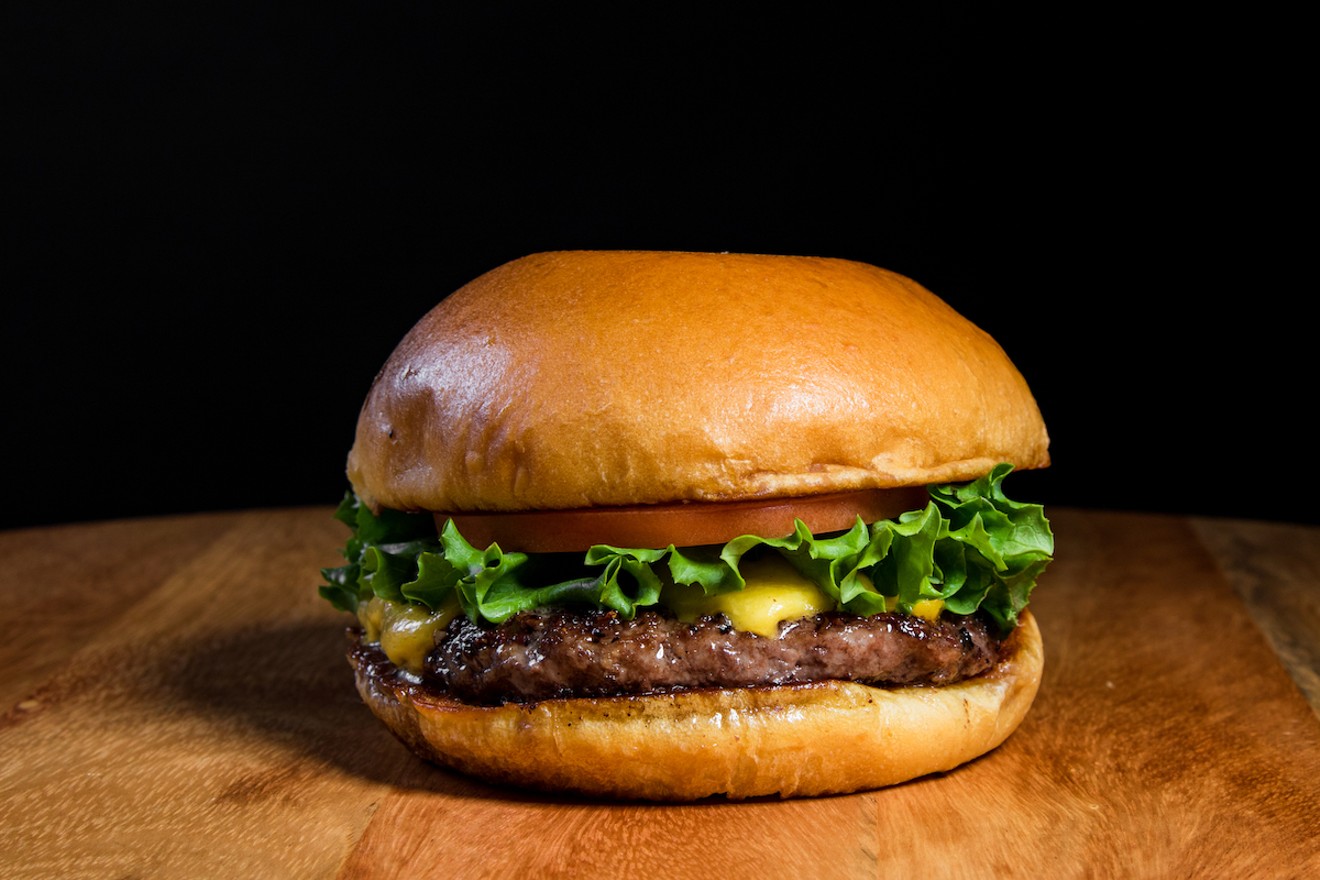 Pincho's classic cheeseburger Photo courtesy of Pincho
What was once an amalgamation of the most undesirable cuts of beef slopped into a cheap, easy-to-eat package is now one of the most popular menu items in the United States.

We're talking about burgers, or what just might be the perfect meal. These handheld, compact sandwiches steal the show at backyard barbecues and take center stage at fast-food restaurants. Why? Because they pack a lot of flavor, in the form of customizable creations that can be gussied up with fancy toppings or as basic as meat and bun.

When you're craving America's most popular sandwich, be sure to consult the alphabetical list below for New Times' top picks.
click to enlarge 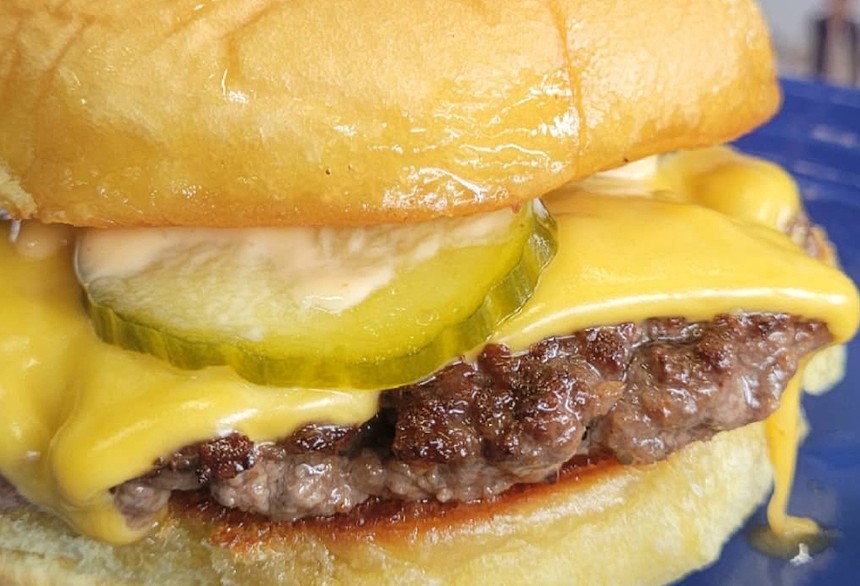 9216 SW 156th St., Miami
786-429-1315
babefroman.com
What began as a grassroots side hustle turned into a full-fledged business in 2018 when Melanie Schoendorfer — the self-proclaimed Sausage Queen of Miami — and her husband, Jason, opened the brick-and-mortar Babe's Meat & Counter in Palmetto Bay. In doing so, they expanded the menu of house-made smoked sausages, specialty bacon, and handcrafted artisan sandwiches to include a curated selection of high-end specialty meats. Today, a butcher counter doubles as a breakfast and lunch spot, where the most popular menu item is the “Babe’s" burger. Each week, the house meat blend changes slightly, explains Jason. While each five-ounce patty starts with prime chuck and brisket, an assortment of top-quality trimmings — a hint of prime Angus here, a bit of American Wagyu there — makes for a delicious final mixture. In a nod to zero waste, trimmed fat is set aside for frying oil, creating the ultimate beef-fat fries to go with the burgers. It all adds up to Miami's best, with each patty cooked to order on the grill, then topped with American cheese, house-made pickles, and sriracha mayo, and fitted into a fluffy Martin's potato roll. 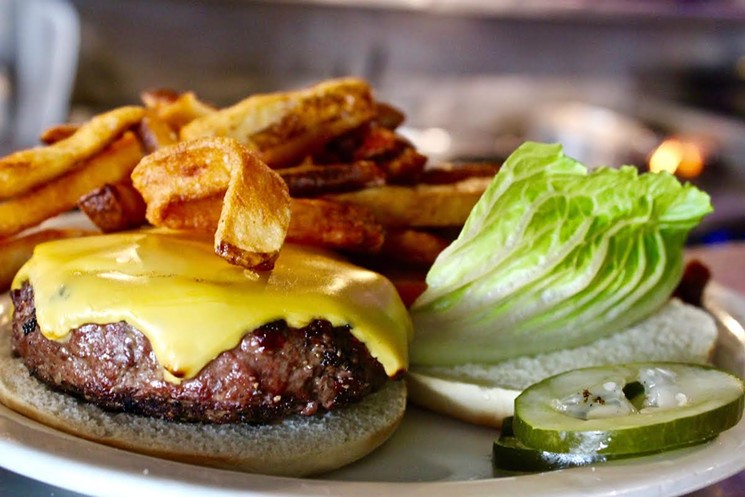 6730 Biscayne Blvd., Miami
305-756-0366
bluecollarmiami.com
Not all burgers are created equal. Some go the extra mile, whether via customization options, a special meat blend, or that one ingredient that makes all the difference. At Blue Collar, you get all of that. It begins with the USDA Prime dry-aged New York strip patty, cooked to order from "blue" to "rare" to "well done." Toppings are numerous, but the classic melted cheese, lettuce, tomato, and onion come standard (throw on a latke if that feels right). It's served on a not-so-classic Portuguese muffin, but that somehow makes this take on an American staple even better: The muffin absorbs all the juice, so there's no dribbling when you shove this baby full force into your pie hole. 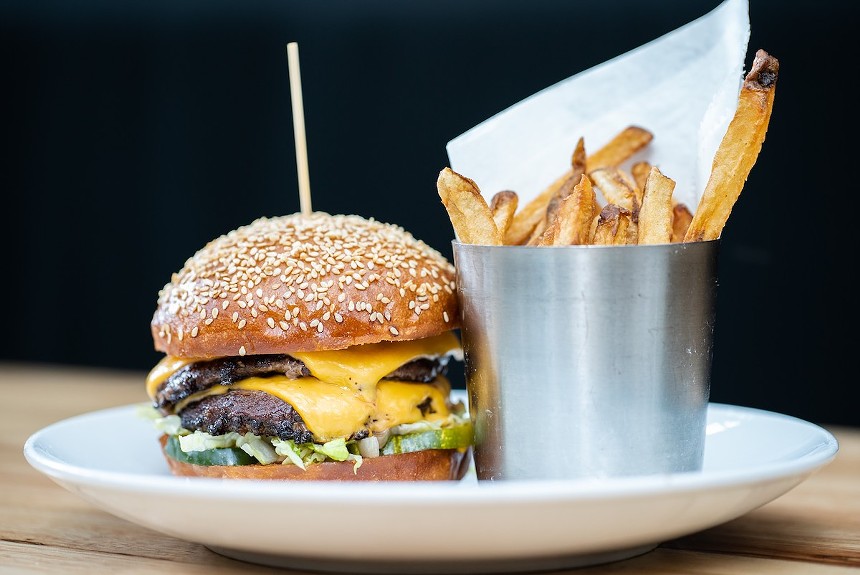 3444 Main Hwy., Coconut Grove
786-353-2940
chugsdiner.com
When Michael Beltran opened Chug’s, his take on a Cuban-inspired all-day café, the chef took his famous Chug burger off the menu at Ariete and gave it a new home at this Coconut Grove diner. As with everything else, he has mastered the art of hamburger-making as only a chef of his caliber can. You’ll find it unchanged, arriving as a double patty topped with American cheese, bread-and-butter pickles, shaved lettuce, and a secret sauce, all of it sandwiched between two house-made sesame-seed buns. Served with fries on the side, the "Chug Burger" is offered for $19 during brunch only — but ask and they just might make you one for dinner or happy hour.
click to enlarge Venezuelan burger restaurant Juanchi's offers some of the best burgers in Miami.
Photo by Nicole Danna

1247 Coral Way, Miami
786-360-2457
juanchisburgers.com
After taking over its home city of Caracas, Venezuela, Juanchi's Burger made its move to the U.S. via Brooklyn, and now Miami. Here the secret is in the sauce — literally. Everything is house-made, from the seasoning on the specialty meat blend to the charcoal-colored buns, as well as a complete line of sauces that include a curry-, caper-, or pickle-infused mayo. The star of the menu is the handful of signature half-pound specialty burgers — customizable with your choice of meat but best as an all-beef take — that are easily identifiable as Juanchi's when ordered with those house-made black buns. The go-to here is the "Juancheese," the restaurant's take on a classic double cheeseburger. You'll get a tower of meat, two perfectly seasoned and pristinely cooked patties topped with double American cheese, and a sidecar of the restaurant's secret "green sauce." We recommend making it extra sloppy with an added dose of those homemade mayos. And don’t forget the sides — Venezuelan-inspired options like fried green plantains with cheese or mini arepas with sour cream. Get a "Frita Burger" at Kush.
Photo courtesy of Deep Sleep Studios

Multiple area locations
kushhospitality.com
Deemed one of the "Top 100 Burgers in America" by the Food Network, Kush’s frita-inspired burger has also waddled away with the coveted “People’s Choice” Award at the South Beach Wine & Food Festival's Burger Bash. The "Frita" is an over-the-top take on a classic frita Cubana. You can procure it for yourself at  Kush Wynwood, Tobacco Road by Kush, or LoKal in Coconut Grove. 14831 Biscayne Blvd., North Miami Beach
305-705-2143
labirrabarusa.com
Cofounders and family members Daniel, Roxana, and Renzo Cocchia will tell you La Birra Bar was conceived as an extension of Daniel's parents' rotisserie deli in Buenos Aires. Today, fans of the brand call that hometown location "the temple,” what with its myriad menu options and the family's self-described obsession with the "perfect burger." It begins with the patty, a proprietary blend that’s hand-chopped from various cuts of beef. Next, the bun, hand kneaded and baked fresh daily for a light and fluffy texture. As for the toppings, everything is made from scratch, from the pickles to the crispy onions to the sauces. When the first U.S. restaurant opened its doors on Biscayne Boulevard in North Miami Beach, it also delivered one hell of a burger menu. Keep it simple with the "Clásica," a six-ounce patty topped with Emmental cheese, lettuce, and the tomato-based house secret sauce. Go savory with the "Umami," topped with aioli, spicy ketchup, confit tomatoes, and Milanese mozzarella. Or test your hunger with the massive "Burger 532," made of alternating layers of cheddar and bacon five patties high that arrives like a teetering Jenga tower of meat and cheese. 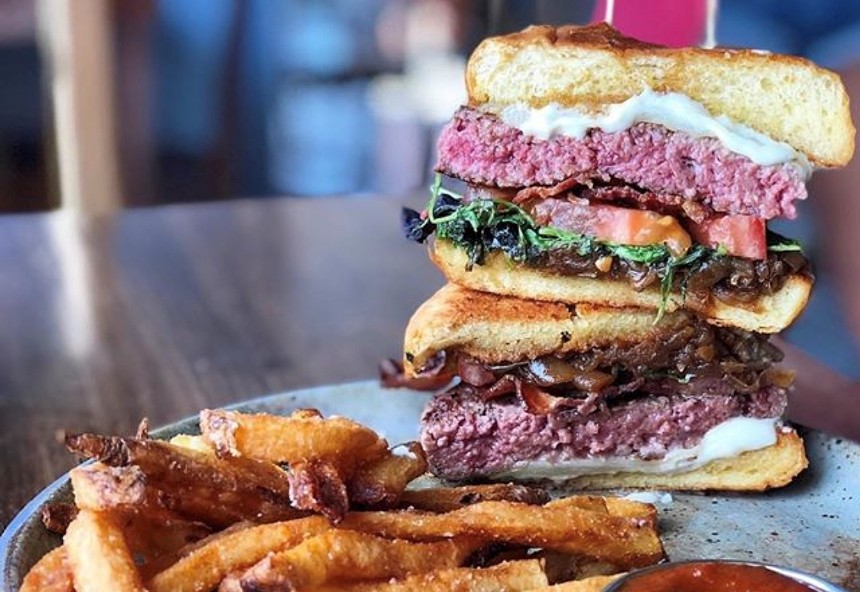 8601 Biscayne Blvd., Miami
305-631-2018
pinchmiami.com
A lot goes into making a burger special. There's the meat, the bun, the toppings — and also the love. When a burger is done right, you just know. At Pinch, that's the type of burger owner John Gallo aims for with his eponymous "Pinch Burger." What you'll get: a custom burger blend, brioche buns made in-house, caramelized onions that are simmered down for hours to extract the perfect amount of umami, melty Swiss cheese, and aioli made fresh daily so the garlic always has just the right bite. The hand-cut fries — cooked to a beautiful golden brown so they're crispy on the outside and hot inside —are this burger's best friend. 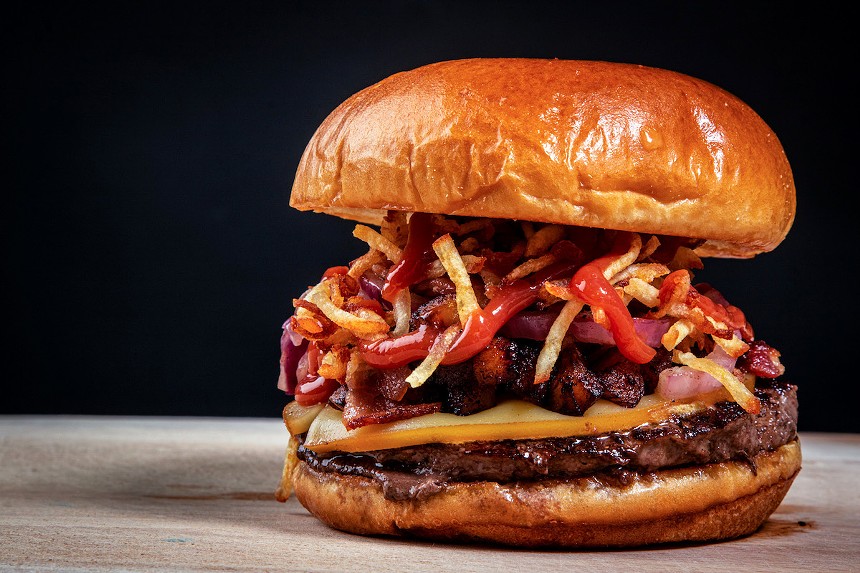 The "Pipo's Choice" from Pincho
Photo courtesy of Pincho

Multiple area locations
pincho.com
South Florida’s beloved burger concept is best known for its numerous, out-of-the-box burger creations, a roster that even includes a monthly special feature. Of course, fan-favorites like "Pipo’s Choice" — smoked gouda, fried sweet plantain bits, applewood-smoked bacon, grilled onions, potato sticks, and guava ketchup — never go out of style. Neither does the "Fritanga": fried queso blanco, cabbage slaw and crema. Or, if you're looking for something different, there's the "Toston" burger, that same seasoned patty, doused in cilantro sauce and served between two fried plantain "buns." However, out of the seven burgers on Pincho's permanent menu, we suggest you start with the eponymous "Pincho." Served on a dense brioche bun, the savory patty is topped with melted cheese, lettuce, tomatoes, onions, a house-made secret sauce, and julienned potatoes that are fried fresh for a satisfying crunch, much like the ones found on the best fritas in Miami. 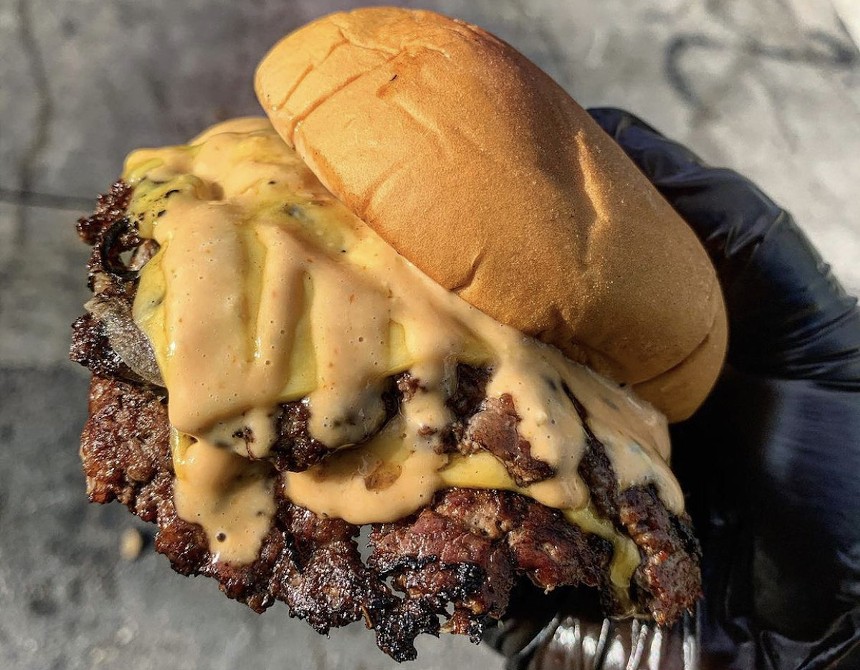 120 NW 24th St., Miami
instagram.com/teds_burgers
In early 2020, former Yardbird Southern Table chef Teodoro Armas decided to start making burgers. The idea was born in his backyard, where his burgers became a hit with friends and family. It quickly turned into a passion pursuit. Today, what began as a pop-up in an O'Reilly Auto Parts parking lot is now a smashing success — literally. These days you'll find Armas' weekend-only pop-up as a regular fixture at J. Wakefield Brewing in Wynwood where hungry patrons line up for a taste of his "American Classic" smash burger, prepared to order with your choice of a single, double, or triple patty. With just a touch of salt for flavor, the hot griddle does the lion's share of the work, creating a beautiful sear that intensifies the flavor, allowing the meat to speak for itself. Finished on a Martin's potato roll, it's a simple — and near-perfect — representation of the smash burger art form. The South Beach Wine & Food Festival judges certainly thought so, awarding Ted's burger a Schweid Judges award at the 2021 Burger Bash. 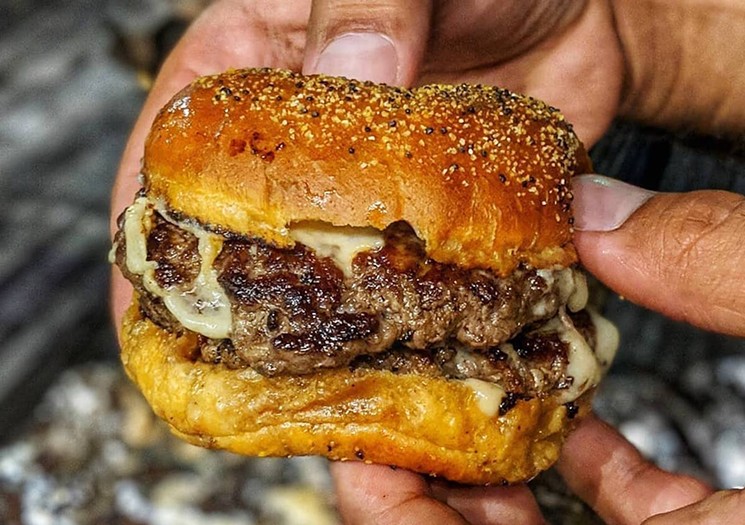 USBS at the Citadel

8300 NE Second Ave., Miami
305-537-6624
usbsmiami.com
Once a no-frills burger, USBS became wildly popular after married chefs Mike Mayta and Keily Vasquez began serving it at their United States Burger Service (USBS) pop-up in Wynwood. The business has since expanded to a brick-and-mortar location inside the Citadel Miami. Here you can still find the couple's classic burgers, including the "Ground" — a single patty topped with "government" cheese and their own "Priority" sauce. Really hungry? Go for the "Two Day," a twin-patty take that delivers double the goodness. Either way, your burger comes topped with the chef's blend of two kinds of melted cheese — spiced with a pinch of salt and mustard seed — and served on a bun that's a cross between a Parker House roll and potato bread. Add a portion of their thick-cut fries, and your meal — and your quest to find one of the best burgers in Miami — is complete.
KEEP MIAMI NEW TIMES FREE... Since we started Miami New Times, it has been defined as the free, independent voice of Miami, and we'd like to keep it that way. With local media under siege, it's more important than ever for us to rally support behind funding our local journalism. You can help by participating in our "I Support" program, allowing us to keep offering readers access to our incisive coverage of local news, food and culture with no paywalls.
Make a one-time donation today for as little as $1.

Laine Doss is the food and spirits editor for Miami New Times. She has been featured on Cooking Channel's Eat Street and Food Network's Great Food Truck Race. She won an Alternative Weekly award for her feature about what it's like to wait tables.
Contact: Laine Doss
Follow:
Facebook: Laine Doss
Twitter: @lainedoss