The Ten Best Doughnuts in Miami Yonutz doughnuts Photo courtesy of Yonutz
For decades, doughnuts — said to be invented in the late 1700s by Dutch immigrants in New York — were just a Sunday-morning childhood treat.

The first American doughnut didn't come along until 1920, when Adolph Levitt began selling fried doughnuts from his bakery in New York City. In 1937, Vernon Rudolph's first Krispy Kreme opened in Old Salem, North Carolina. And, nearly a decade later, a man named William Rosenberg opened a doughnut shop in Massachusetts he called Open Kettle — only to rename it Dunkin' Donuts in 1950.

For years, doughnut shops in Miami were few and far between. These days, however, a growing number of bakers have popped up, offering their takes on the beloved treat, and lead us to this alphabetical list of the ten best doughnut shops in South Florida. 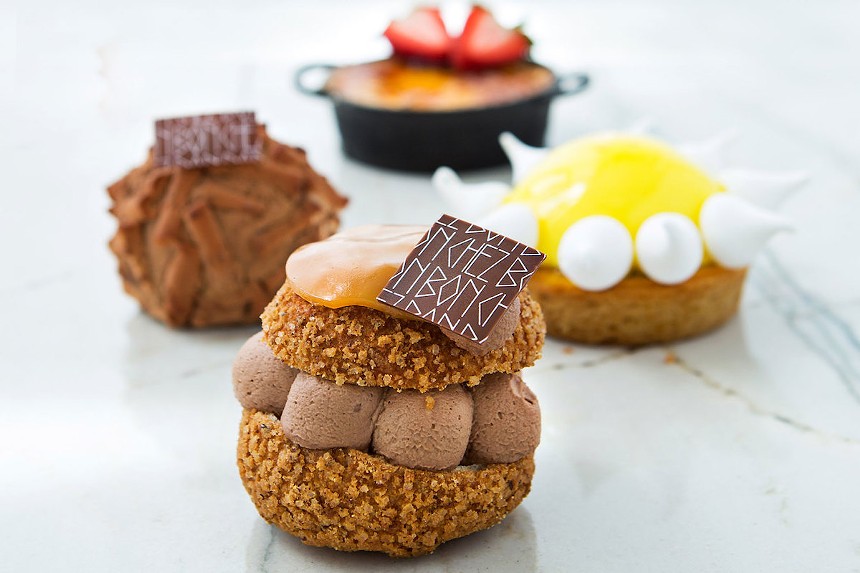 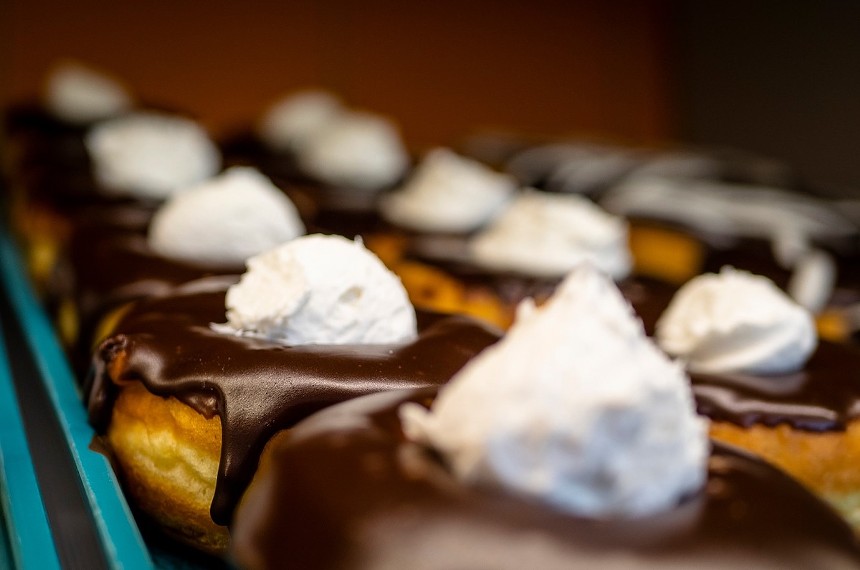 Three Broward County locations, including:
3101 N. State Road 7, Margate
754-444-3157
dandeedonuts.com
If you want to talk old-fashioned — and that goes for the shop and not just the type of doughnut — look no further than Dandee Donut Factory. Founders Frank Pucine and Peter Spyredes started the doughnut and diner business in the late 1980s, but today their stores (now owned and operated by different people) look and feel like they've been around much longer. Each shop offers more than 50 varieties of doughnuts, including the ever-popular "Dandee Donut": a giant, fluffy raised-yeast number slathered in a honey glaze and rolled in cake crumbles. And no worries about running out of goods and closing up shop — the Deerfield Beach, Pompano Beach, and Margate locations are open 24 hours, with doughnuts all day long. 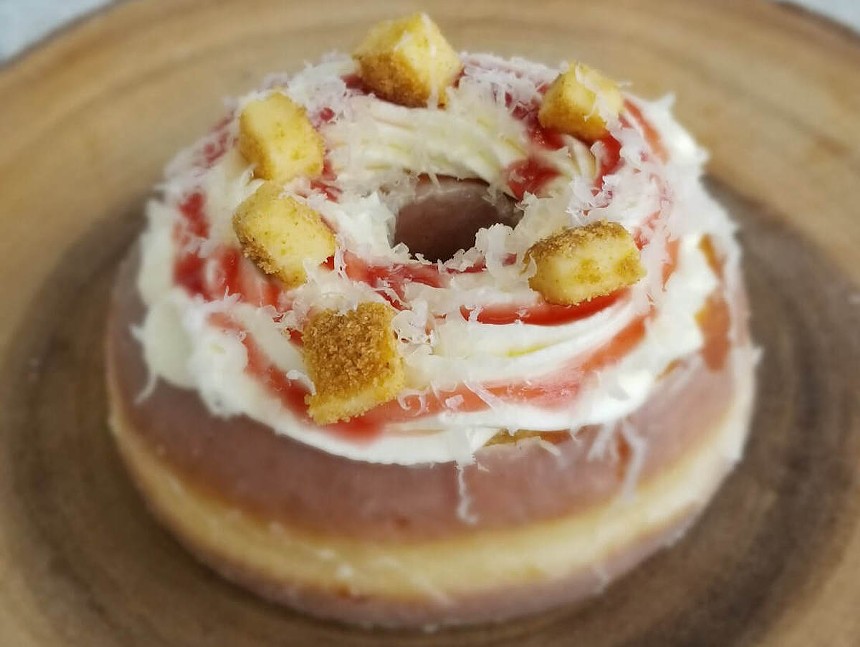 Donut Break's cheesecake doughnut is made with real Manchego cheese and topped with tiny squares of cheesecake.
Photo courtesy of Donut Break 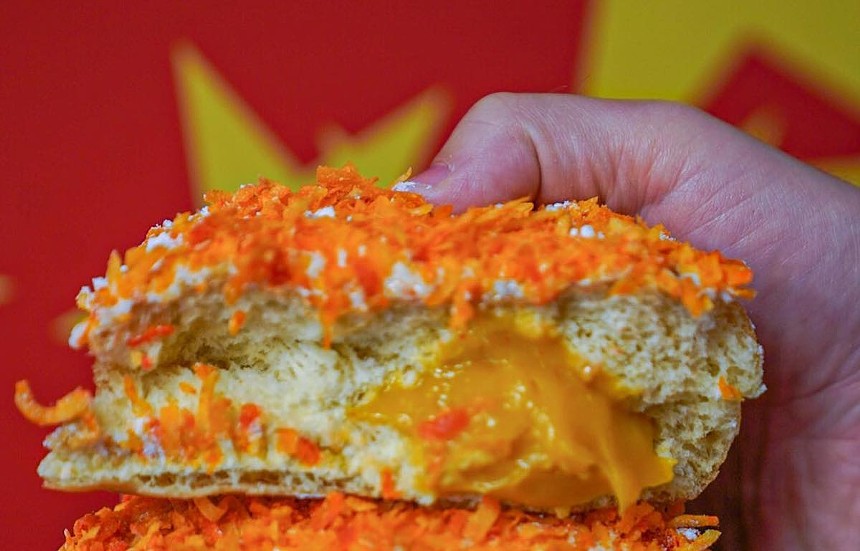 102 N. 28th Ave., Hollywood
954-929-1118
thehollywooddonutfactory.com
Doughnuts might not be all that's on the menu here, but that doesn’t stop Hollywood Donut Factory from claiming the pastries as the main attraction. And rightly so: The doughnuts here are indeed the star of the show. With nearly 100 variations, patrons can choose from classic offerings like blueberry cake or chocolate glazed along with dozens of unique flavors. Highlights include the shop’s mango- or guava and cheese-stuffed doughnuts, a crushed peanut-topped and jelly-infused peanut butter and jelly doughnut, and a salted caramel sour cream doughnut. The iconic glazed Krispy Kreme is still one of the best doughnuts in Miami.
Photo courtesy of Krispy Kreme

530 NE 167th St., Miami
305-974-5303
krispykreme.com
For a long time, Krispy Kreme was one of the only places in Miami to find a quality doughnut. Founded in North Carolina in 1937, the chain remains relevant and popular. Each location can produce tens of thousands of doughnuts per day, which may help explain why our city never felt the need to add more doughnut shops. Krispy Kreme's glazed doughnut remains a bestseller, but with more than 30 varieties, plenty of limited-edition specials, and a 24-hour window, it remains one of the best options to satisfy your doughnut cravings. 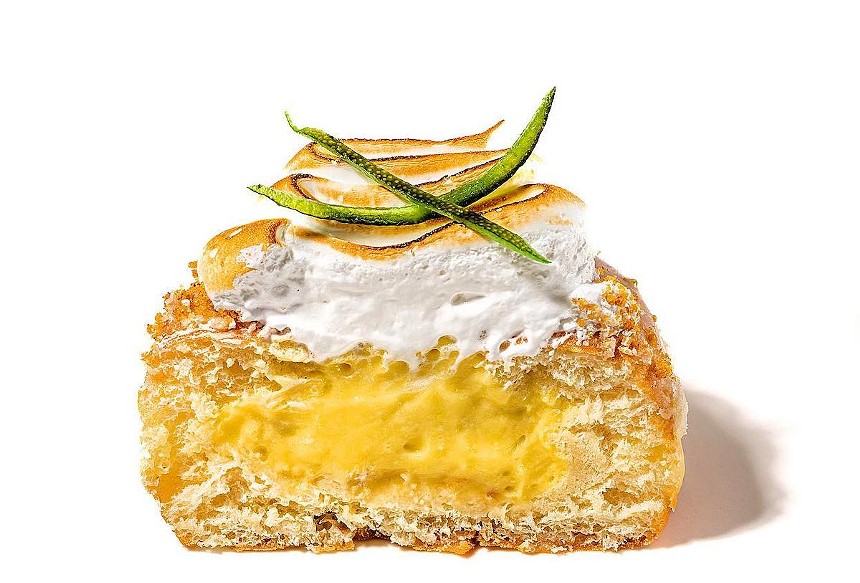 maxdoutdonuts.com
Intricate desserts, classic cakes and pies, creative cookies, petit gateaux — Miami native Max Santiago has baked them all. The longtime pastry chef has nearly three decades of experience crafting the sweeter things in life, not the least of which is his 24-hour raised brioche dough, which will take center stage when Max’d Out Donuts, his North Miami Beach doughnut shop, opens this summer. The menu will feature a rotating selection of Santiago’s pop-up favorites, including a vegan and gluten-free take. Keep an eye out for his glazed version, which the baker considers the hallmark of a good doughnut maker, made with whole vanilla bean and buttermilk. Favorites include a café con leche roll, a cinnamon roll that’s deep-fried with layers of espresso grounds and a glaze made with café con leche and topped with a cream cheese glaze, and the key lime pie doughnut, a homage to Florida’s unofficial dessert, with a key lime custard, torched meringue, and a key lime glaze. For now, find Max's doughnuts at regular pop-up events across South Florida. 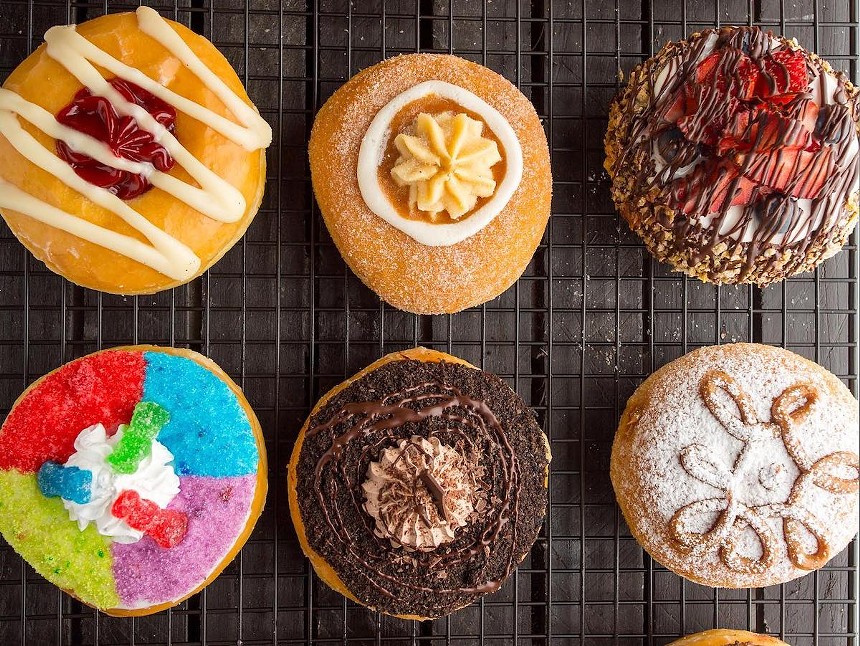 Three area locations, including:
8870 SW 40th St., Miami
305-223-6656
mojodonuts.com
If Mojo Donuts is the preferred pit stop for Jennifer Lopez after a Super Bowl performance, who are we to deny these doughnuts’ addictive appeal? We have these star-approved pastries thanks to husband-and-wife team Shelly and chef Shawn Neifeld, who were among the first to offer gourmet doughnuts to the South Florida masses in 2014. Housed in a wee strip mall in Pembroke Pines, the original location offered a rainbow of fun flavors with sufficient mojo to make up for the area’s lacking doughnut scene. Mojo has grown significantly, with locations in Hollywood, Westchester, and Coral Gables. Like many specialty shops, most of Mojo's baked goods — all 50-plus flavors that rotate daily — tend to sell out rather quickly, making it less doughnut shop and more coffeehouse come noon. An ever-changing lineup is the name of the game here, while fan favorites like mango 'n' cheese, guava 'n' cheese, maple bacon, and the classic glazed "Mojo Rising” remain regulars. 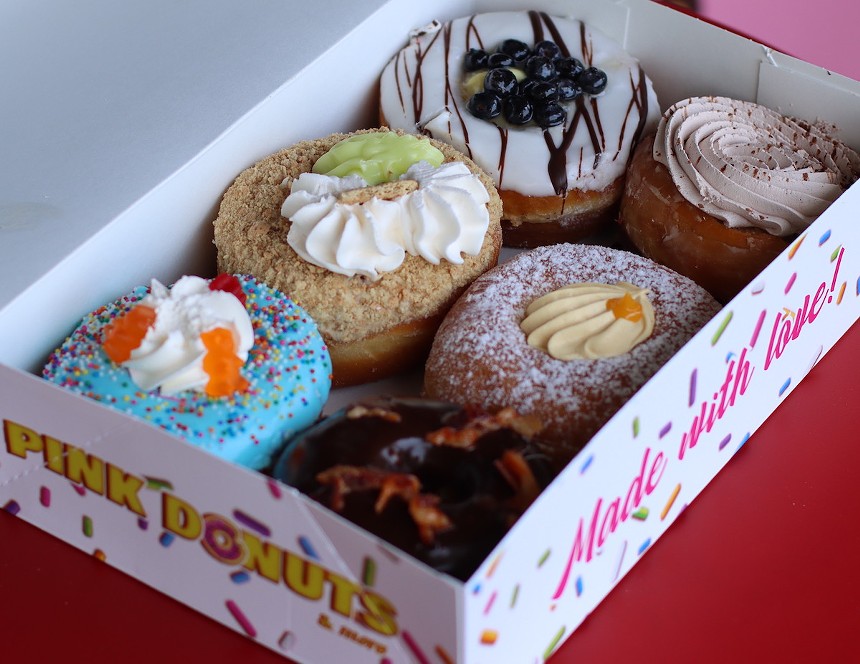 Three area locations, including:
222 67th St., Miami Beach
786-431-5144
pinklovedonutsandmore.com
South Florida resident and Argentinian transplant Diego Macedo and his family decided to use a road trip to New York to unlock the secret to a sublime doughnut experience. With plenty of inspiration, Macedo returned to Miami, where his doughnut-crazy imagination took off, prompting the launch of his own bakeshop, Pink Love Donuts. Today, the thriving, family-run business is three locations strong. Here, there's no such thing as too many flavors. The bakery has more than 80 in rotation, from classics like a plain frosted or raspberry jelly-filled to gourmet versions with crazy toppings and/or fillings, and vegan offerings (rendered in a square shape) that include a divine mamey-filled take. Macedo kicks it up a notch with a limited series dubbed his “ultimate” creations — a designation reserved for his most decadent renditions, including a line of “drunken” doughnuts. Outfitted with a miniature pipette aimed at the pastry's core, they’re filled with spirits like Baileys Irish Cream liqueur or Kahlúa, making for a buzzy morning treat. 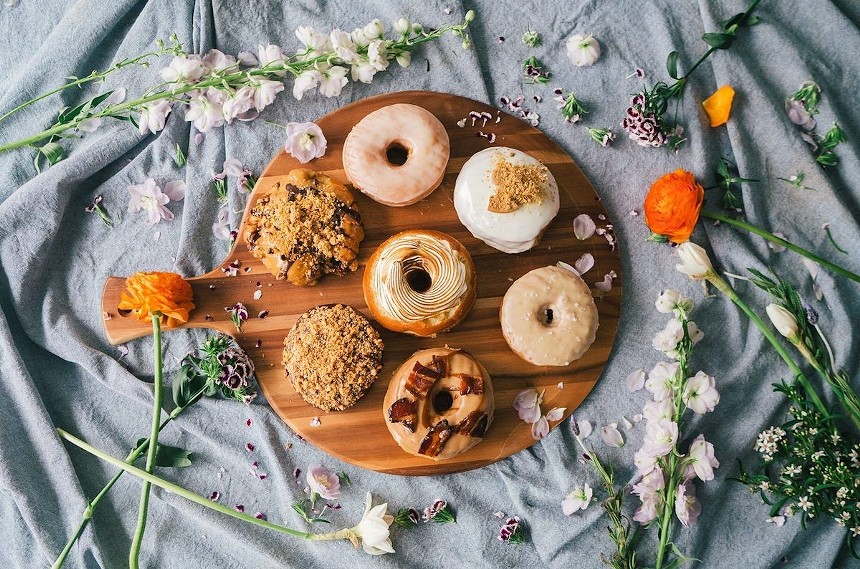 Multiple area locations, including:
50 NW 23rd St., Miami
305-639-8501
saltydonut.com
From humble pop-up beginnings to multiple South Florida locations and several nationwide spots to its name, the Salty is Miami’s homegrown doughnut success story. As the Magic City’s first artisanal doughnut shop, the Salty Donut (it ditched the "Donut" from its moniker a few years back) won the hearts and appetites of Miami, often selling upward of 1,200 doughnuts a day. The pastries are so popular, they even caught the attention of the Today show. The OG shop in Wynwood offers sweet varieties like traditional glazed buttermilk, savory ones like maple bacon, gluten-free versions, and even alcohol-infused treats like mimosa-style or spiked doughnut holes. Yonutz in Sunrise is home to the Smash Donut.
Photo courtesy of Yonutz

121 NW 136th Ave., Sunrise
954-846-1115
yonutz.com
What sets Yonutz apart from the other doughnut peddlers? It's the official home of the "smash" doughnut, a signature offering that marries a fluffy doughnut stuffed with your choice of ice cream and candy fillings before it's "smashed" on a hot griddle for the ultimate Instagram-worthy creation. Take the "Miami Smash," stuffed with dulce de leche ice cream, Maria cookies, white chocolate chips, and finished with a guava drizzle. The dessert rush doesn’t end there. Dozens of fresh large and mini gourmet doughnuts are available, flavors like apple pie, Boston cream, "Crunch-Berry Bang Deluxe," and peanut butter and jelly. Yonutz also has a "secret" menu, available only to those who join the Yonutz free VIP club (sign up on the website for free). Exclusive menu items include smash doughnuts that have yet to be released to the public, and milkshakes you won't find on the regular menu.
KEEP MIAMI NEW TIMES FREE... Since we started Miami New Times, it has been defined as the free, independent voice of Miami, and we'd like to keep it that way. With local media under siege, it's more important than ever for us to rally support behind funding our local journalism. You can help by participating in our "I Support" program, allowing us to keep offering readers access to our incisive coverage of local news, food and culture with no paywalls.
Make a one-time donation today for as little as $1.

Clarissa Buch Zilberman is a writer and editor, with her work appearing in print and digital titles worldwide.
Contact: Clarissa Buch