Get the Coney Island Joe's hot dog topped with classics like diced onion, melted cheese, sauerkraut, and chili for a taste of New York City. Photo by Nicole Danna
No question about it: The hot dog — AKA the frankfurter, the frank, the weenie, the dog, and the red hot — is an American staple. It's perhaps the only food that's more American than hamburgers and French fries.

A slim, humble sausage made of beef, pork, or a combination of the two, the hot dog is cooked up and topped off in so many different ways one could say there's a signature dog for nearly every city across the country — not to mention a few countries.

Known for its empanadas and fritas cubanas, Miami might not seem like a hot dog hotbed, but frankly (forgive us), delicious takes on the ostensible all-American classic are all around us. You just have to know where to look.

July is National Hot Dog Month, but it's fitting to celebrate this fine American fare any time of year. Just ask the National Hot Dog and Sausage Council, whose studies have shown that Americans are always down to consume a record-breaking number of these famed tubes of meat — to the tune of 944 million pounds of hot dogs sold at U.S. retail stores in 2020 alone.

There's never a bad time to sample the doggone goodness Miami has to offer at the ten favorites listed in alphabetical order below. 8747 SW 40th St., Miami
305-207-0555
arbetterhotdogs.com
A longtime favorite for more than 40 years, this Miami mainstay is now operated by brothers David and Joe Arbetter. Together, they're keeping the family's dream alive at Arbetter's Hot Dogs, where they create the type of atmosphere and service you would have found decades ago. That means the chili is made fresh every day, the buns are served pillow-soft, and —  most importantly — the ambiance remains unpretentious. So what exactly goes into constructing flawless frankfurters? In the case of Arbetter’s late founder Bob Arbetter and his relatives, it's simple snacks like the "All Around" — just mustard, onions, and relish — that shine. It’s also proven with the famed sauerkraut dog with mustard, or the chili onion dog — all of them best when flanked by a mountain of chili cheese fries. 6401 Sheridan St., Hollywood
954-966-8800
Sure, Coney Island Joe's giant yellow-and-blue tent isn't really a restaurant — it's more of a giant hot dog stand exposed to the elements and looking a little ragged. But that's a real New York City pushcart in there, and those are real Sabrett hot dogs, shipped straight from New York. It's also founded by a man named Elliot Garber, a South Florida transplant who named the stand-like restaurant space after the original Coney Island Joe's that opened in Brooklyn in 1952. Over the years, the place has become the go-to spot for its New York-style Coney Island hot dogs, and Garber is quick to point out that his dogs aren't just New York-inspired hot dogs — they're the same authentic dogs you'll find served up at nearly every street corner in Manhattan that give that quintessential "pop" on the first bite. The menu also offers a number of versions, from a plain grilled dog with ketchup and mustard to a true New York pushcart water dog topped with yellow mustard, sauerkraut, and chopped onions. If you see him, say thank you to Garber. He just saved you a 1,400-mile trip. 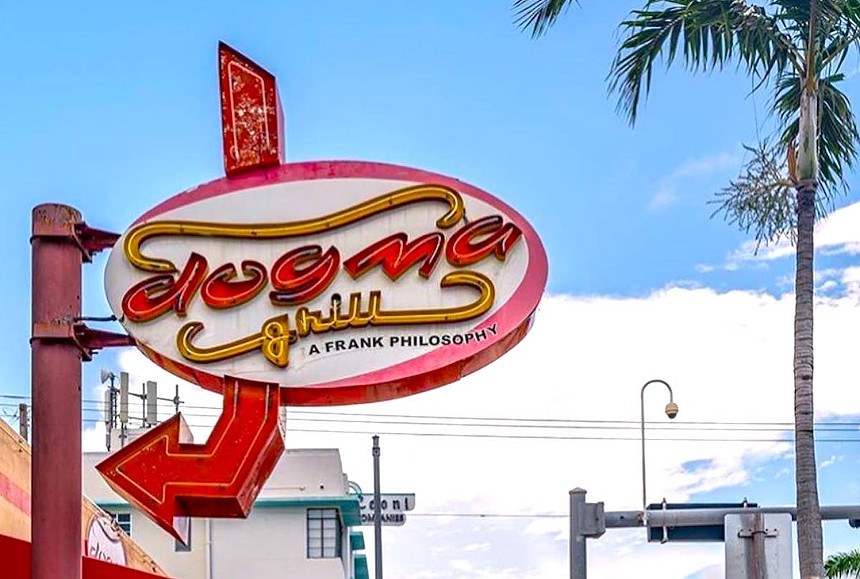 Dogma Grill is the place to go for design-your-own hot dogs.
Photo courtesy of Dogma Grill

7030 Biscayne Blvd., Miami
305-759-3433
dogmagrill.com
Frankly (we can't help ourselves!), there's no better spot to snag your own do-it-yourself hot dog than at Dogma Grill. This MiMo District hot dog shack boasts plentiful classics — from Italian sausage, veggie, and turkey franks to bratwursts and jumbo beef dogs. While there are plenty of specialty franks to choose from — many inspired by the streets of New York, Chicago, Atlanta, Colombia, and beyond — the folks at Dogma will also create a dog any way you want it. The options about thanks to plenty of options topped with the available accoutrements on hand, a selection that includes bacon, chili, sauerkraut, relish, coleslaw, baked beans, chopped onions, and cheese. 75 SW 11th St., Miami
305-497-7974
elalphadog.com/brickell
You'll get a selection of classic and specialty dogs at this Venezuelan-inspired restaurant. Three pay homage to the street-style fare you'll find in Colombia and Venezuela, topped with the requisite shoestring potatoes, pineapple sauce, pink sauce, and queso cebú (traditional Venezuelan hand cheese). Out of the nine hot dogs on the menu El Alpha Dog, however, try is the eponymous “El Alpha" filed under the specialty picks. A unique choice you won't find anywhere else in Miami, it's a Sabrett all-beef dog topped with onions, scallions, “Alpha” and Korean barbecue sauces, pork belly, toasted white sesame seeds, and cilantro. The "El Phillie" is an all-star, too. Atop the frank you'll get some grilled flap meat that's smothered in melted American cheese, onions, green peppers like your traditional Philly cheesesteak along with mustard, garlic sauce, and the restaurant's own sweet corn sauce. 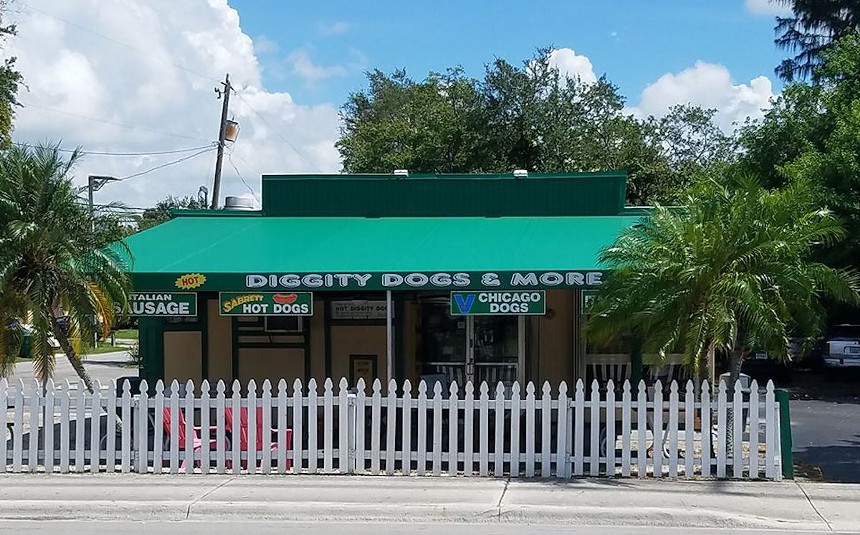 2641 Griffin Rd., Dania Beach
954-981-7827
orderhotdiggitydogs.com
As the name suggests, Hot Diggity Dogs & More on Griffin Road offers more than hot dogs. You can order up a damn fine sausage and pepper or Italian beef sandwich, Philly cheesesteak, chicken wings — even a fried fish sandwich. As far as hot dogs go, the short list of options is still what they do best, however. A Chicago dog arrives with all fresh fixings, and the chili cheese and onion is smothered in just the right amount of ingredients so every bite is just as good as the last. If you really want something special, a not-so-doggy option here is the house favorite: a Polish beef sausage served "Maxwell Street Style" — a perfectly cooked, plump sausage topped with grilled onions, whole pickled peppers, and a slick of yellow mustard served on a steamed poppy seed bun. 8410 W. Flagler St., Miami
305-953-6845
losperros.com
Hot dogs are widely considered all-American fare, but it wouldn't be Miami if you couldn't try one with a Latin twist. At Los Perros, you can scarf down a Colombian-style dog at almost any hour of the night, making for the ultimate hangover food pitstop. The Kendall location out past the turnpike is the OG, but there's now a Los Perros in Miami Gardens and another in Coral Point Plaza. That last hole in the wall serves sizzling hot dogs from noon until 3 a.m. on Fridays and Saturdays, and from noon till 1 a.m. every other day of the week. And don't let the shop's looks deceive you: Los Perros may be no frills, but it's full of flavor. Try the "SuperPerro” — a customer favorite that features a grilled dog topped with crushed potato chips and a house-made pink sauce and served in a locally baked artisan-style bun. Verde's regular, chili and Colombian hot dogs will be on offer on Memorial Day.
Photo by Lazaro Llanes

4491 N. University Dr., Lauderhill
954-306-3014
losverdes.com
If you've heard whispers of a hot dog so enormous — and with such a rainbow of toppings — you might not be able to finish it in one sitting, you're probably thinking of Venezuelan and Colombian-style perros, both of which you can find in abundance in South Florida. Some of the best are served at Los Verdes, where their “perros" can be swapped out for chicken, chorizo sausage, or chopped beef. The classic take is, of course, done best with a hot dog and the traditional street food-style mashup of toppings that seem odd at first but blend beautifully together. It begins with a plump perro nestled in a steamed bun, hidden under a thick blanket of toppings like a sweet pineapple puree, garlic sauce, and a creamy, mayo-based pink sauce to chopped bacon, onion, mozzarella cheese, and quail eggs. And just when you think this heart-stopper couldn't get more deadly or indulgent, the coup de grâce arrives with a layering of crumbled potato chips, lending a salty, crispy bite to the mix. 1 Seminole Way, Hollywood
954-314-7226
markyscaviarlounge.com
At Marky's Caviar Lounge inside the Seminole Hard Rock Hotel & Casino, chef Buddha Lo — an Eleven Madison Park and Gordon Ramsay London alum — applies contemporary techniques to execute opulent dishes. The same rings true for the most plebeian of meals with his take on the hot dog. Dubbed the "Huso" it reigns supreme as the area's most gussied-up hot dog. What you'll get: a plump, crabmeat frank topped with meaty chunks of king crab leg, ripe avocado, pickled mustard seed, and a heaping portion of caviar. The roe lends a buttery-rich flavor that pairs perfectly with the seafood dog, which arrives nestled in a toasted, Kewpie mayo-slathered brioche bun. Pincho is known for its hamburgers, but they make a mean hot dog, too.
Photo courtesy of Pincho

9251 W. Flagler St., Miami
786-590-1455
pincho.com
Scrumptious, award-winning burgers such as the mouthwatering toston and fritanga are the name of the game at Pincho, but that doesn’t mean the team behind this popular joint can’t craft game-changing dogs. Take one bite of the eponymous "Pincho" — a 100 percent kosher beef dog topped with chopped bacon, melted cheddar, mango sauce, pink sauce, and a heavy layer of potato sticks — and you'll be hooked on these menu items, as well. 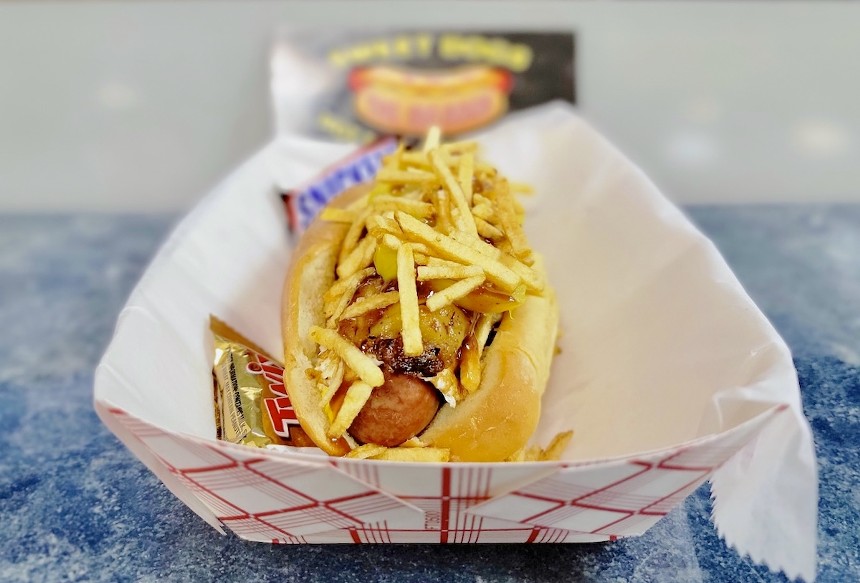 4749 SW Eighth St., Miami
305-448-4900
instagram.com/sweetdogs305
Sometimes a wiener is all you need to sweeten your day. Cue Sweet Dogs 305, a local go-to that has remained consistent via its versions of outrageous, palate-pleasing hot dogs with all the fixings. Go straight for two simple pleasures you’ve never tried together: the mac hot dog, piling mac 'n' cheese, grated Parmesan, and garlic croutons on a hot dog. Sweet Dogs also has franks inspired by home teams such as the Dolphins and the Heat, but unlike the sports world, these dogs don’t disappoint.
KEEP MIAMI NEW TIMES FREE... Since we started Miami New Times, it has been defined as the free, independent voice of Miami, and we'd like to keep it that way. With local media under siege, it's more important than ever for us to rally support behind funding our local journalism. You can help by participating in our "I Support" program, allowing us to keep offering readers access to our incisive coverage of local news, food and culture with no paywalls.
Make a one-time donation today for as little as $1.

Nicole Danna is a Palm Beach County-based reporter who began covering the South Florida food scene for New Times in 2011. She also loves drinking beer and writing about the area's growing craft beer community.
Contact: Nicole Danna
Follow:
Twitter: @soflonicole
Instagram: @soflo_nicole/
Maureen Aimee Mariano is a freelance food writer for Miami New Times. She earned a bachelor of science in journalism from the University of Florida before making her way back to the 305, the city that first fueled her insatiable appetite.
Contact: Maureen Aimee Mariano
Follow:
Facebook: Maureen Aimee Mariano
Twitter: @maureenaimee