From Compton to Miami: How Mac 'n Cheese Brought Two Men From Rival Gangs Together 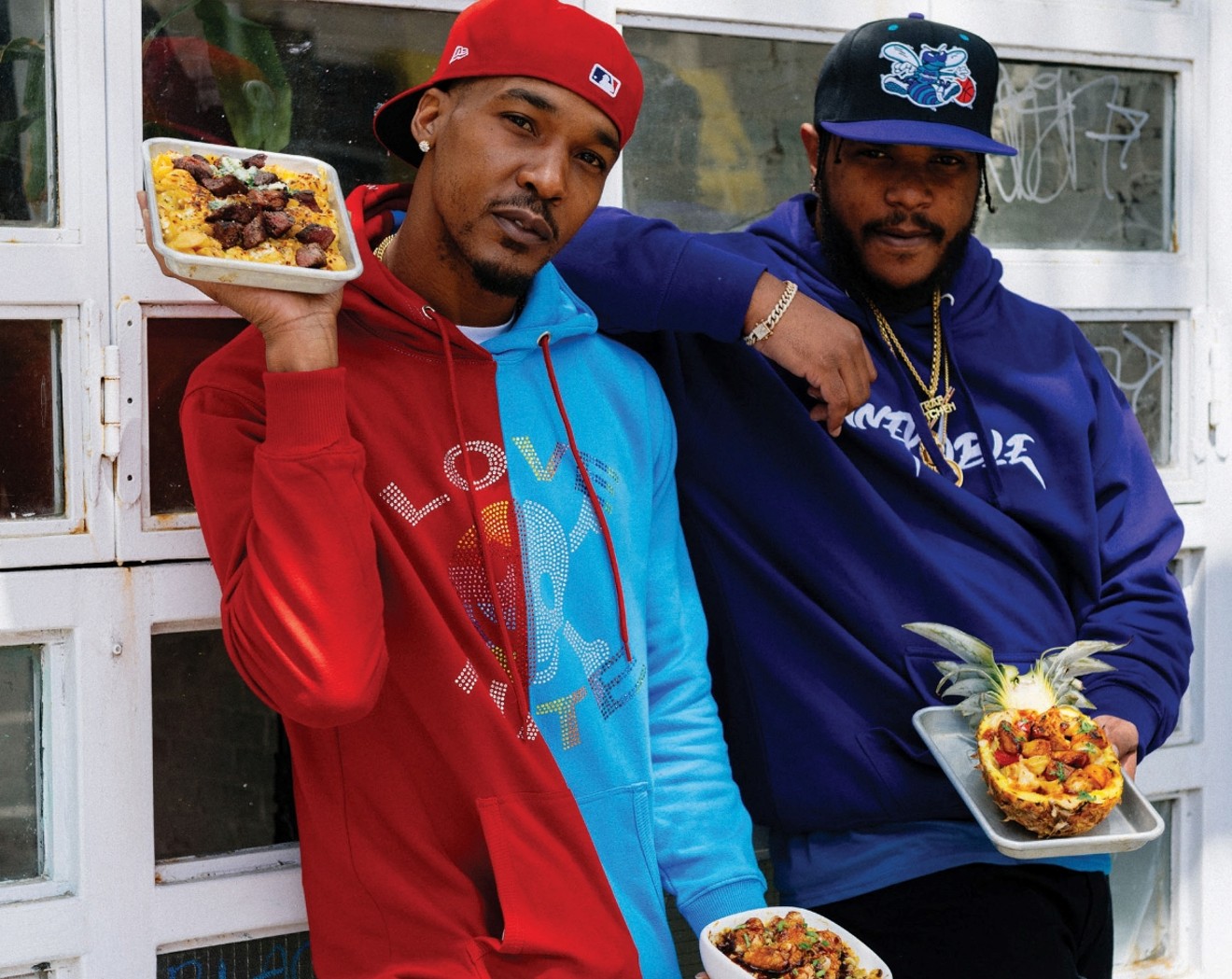 Trap Kitchen's Roberto "News" Smith (l) and Malachi "Spank" Jenkins. Photo courtesy of Trap Kitchen
Malachi “Spank” Jenkins and Roberto “News” Smith were childhood friends, growing up in Compton in Los Angeles County. As kids, Spank and News were inseparable, bonding over girls and throwing house parties. Together, the duo seemed unstoppable, except for one thing.

“We met through our cousins, but my family were Crips and his family were Bloods," Jenkins tells New Times, referring to two of Compton's most notorious gangs. "Generally speaking, we were rivals,” Jenkins adds about his complicated relationship with Smith.

Even as preteens, Jenkins and Smith had to hustle on the streets of Compton to make ends meet for their families, doing whatever it took to bring home a few dollars, including selling some drugs. Still, the two had solid family ties.

Jenkins recalls helping his mother cook, starting at the age of 11. “My mom worked two jobs. By the time I would get home from school she would start dinner, and I would finish it,” he said.

Those years in the kitchen were the way to a better life for both Jenkins and Smith, who started cooking for friends. “News would throw game nights and I would cook and we would entertain our friends and it flew from there,” recalls Jenkins.

“We were tired of getting in trouble. We were just trying to find our way in our early 20s,” said Jenkins who decided to attend culinary school and gain experience as a private chef, helping both him and his friend turn a corner. “We went from selling drugs to selling plates,” added Smith.

The two started a business, posting pictures of their flavorful, homestyle dishes across social media where people could place orders to pick up the food.

“We would offer taco Tuesday or breakfast – our most popular meal - and go back to the store and shop for more ingredients with the profits. We would then do a dinner. It was a sensation, it changed our lives. We were used to hustling in the past. By cooking, we were making the same amount of money legitimately, " says Smith.

The guys say their food became so popular the police questioned what they were actually selling.
“We had so much traffic it looked like a dope house. That‘s where the name Trap Kitchen came from,” said Jenkins.

For Smith and Jenkins, the acronym TRAP also stands for "Take Risks And Prosper" and "To Rise Above Poverty."

They’ve since been catapulted to celebrity chef status with several tv appearances on the Today show, Martha & Snoop's Potluck Dinner Party, Vice, and BET. They have a restaurant in Oakland, California along with food trucks around Los Angeles and other big cities like Atlanta.

They have one cookbook out now, and another book Trap Kitchen: Mac N’ All Over the World, with a forward by Snoop Dogg, which was just released this week.

Now they’re looking for a brick-and-mortar spot in Miami-Dade. “Our ideal location is Wynwood because of the foot traffic and a lot of tourists. South Beach wouldn’t be a bad idea either because of the traffic that they get,” said Smith.

For now, you can try their food every Saturday at Smorgasburg Miami where they feature a seafood Trap Mac with shrimp and crab ($20), fried chicken Trap Mac ($15), and a five cheese blend Trap Mac ($10).

Don't be surprised when you see the two men slinging mac 'n cheese side by side at Smorgasburg. “Even though we are Crips and Bloods, we are still brothers,” said Smith.

Trap Kitchen at Smorgasburg Miami. 2600 NW Second Ave., Miami; smorgasburgmiami.com.
KEEP MIAMI NEW TIMES FREE... Since we started Miami New Times, it has been defined as the free, independent voice of Miami, and we'd like to keep it that way. With local media under siege, it's more important than ever for us to rally support behind funding our local journalism. You can help by participating in our "I Support" program, allowing us to keep offering readers access to our incisive coverage of local news, food and culture with no paywalls.
Make a one-time donation today for as little as $1.